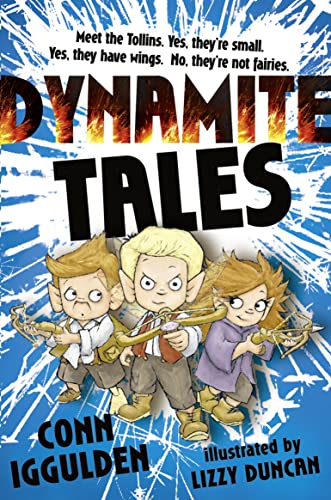 More tall tales about tiny people from the bestselling author of THE DANGEROUS BOOK FOR BOYS - now in paperback with all new black and white illustrations... But whatever you do, DON'T call them fairies!

More tall tales about tiny people from the bestselling author of THE DANGEROUS BOOK FOR BOYS - now in paperback with all new black and white illustrations... But whatever you do, DON'T call them fairies!

We return to Chorleywood, home of the Tollins - tiny creatures with wings who aren't fairies and are about as fragile as a house brick. In three thrilling stories, they will face the trials of armed invasion, radio technology and... amateur dramatics.

In Romeo and Beryl, Sparkler discovers an old human book and decides to put on a play of a story that is filled with great love and even more shouting. At the same time, a new craze sweeps Chorleywood, as Dragonfly racing literally takes off.

In Radio, the Dark Tollins of Dorset invade in force, with a housecat leading the charge. Sparkler, Wing, and Grunion must find a way to save themselves, and possibly the cat as well.

Finally, in Bones, the Tollins leave Chorleywood on a mission of mercy. The homes of the Dark Tollins are about to be blown up by humans! We will discover the importance of hot tea and toast in such desperate times. As well as jam, obviously. Once again, it's Sparkler and his band of Tollins to the rescue!

Born in London, Conn Iggulden read English at London University and worked as a teacher for seven years before becoming a full-time writer. He lives in Hertfordshire with his wife and their children.
GOR011837222
9780007304028
0007304021
TOLLINS II: DYNAMITE TALES by Conn Iggulden
Conn Iggulden
Used - Like New
Paperback
HarperCollins Publishers
20120329
240
N/A
Book picture is for illustrative purposes only, actual binding, cover or edition may vary.
The book has been read, but looks new. The book cover has no visible wear, and the dust jacket is included if applicable. No missing or damaged pages, no tears, possible very minimal creasing, no underlining or highlighting of text, and no writing in the margins
Trustpilot