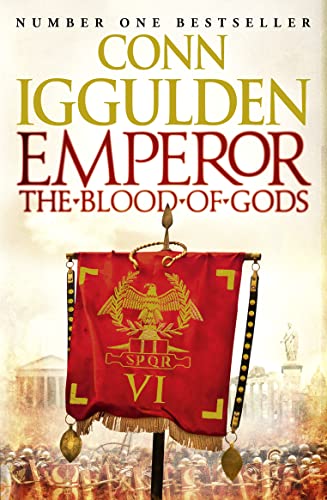 Emperor: The Blood of Gods by Conn Iggulden

Julius Caesar has been assassinated. A nation is in mourning. Revenge will be bloody.

Rome's great hero Julius Caesar has been brutally murdered by his most trusted allies. While these self-appointed Liberatores seek refuge in the senate, they have underestimated one man: Caesar's adopted son Octavian, a man whose name will echo through history as Augustus Caesar.

Uniting with his great rival Mark Antony, Octavian will stop at nothing to seek retribution from the traitors and avenge his father's death. His greatest hatred is reserved for Brutus, Caesar's childhood friend and greatest ally, now leader of the conspirators.

As the people take to the streets of Rome, the Liberatores must face their fate. Some flee the city; others will not escape mob justice. Not a single one will die a natural death. And the reckoning will come for Brutus on the sweeping battlefield at Philippi.

`A clever and convincing narrative ... the best book in the series' SUNDAY TIMES

`Iggulden brings his five volume series about Julius Caesar to a close with this clever and convincing narrative... with a compelling grasp of Roman realpolitik' SUNDAY TIMES CULTURE

Praise for the EMPEROR series:

`If you liked Gladiator, you'll love Emperor' THE TIMES

`A brilliant story - I wish I'd written it. A novel of vivid characters, stunning action and unrelenting pace. It really is a terrific read'
Bernard Cornwell

Praise for the CONQUEROR series:

`Iggulden is in a class of his own when it comes to epic, historical fiction' DAILY MIRROR

`This is energetic, competent stuff; Iggulden knows his material and his audience' INDEPENDENT

`Iggulden...tells an absolutely cracking story...the pace is nail-biting and the set dressing magnificent' THE TIMES

`I felt as if a blockbuster movie was unfolding before me...read the book before Hollywood takes it over' DAILY EXPRESS

Born in London, Conn Iggulden read English at London University and worked as a teacher for seven years before becoming a full-time writer. He is the author of the number one bestselling Emperor series. Conn Iggulden lives in Hertfordshire with his wife and their children.

GOR010298216
9780007482825
0007482825
Emperor: The Blood of Gods (Emperor Series, Book 5) by Conn Iggulden
Conn Iggulden
Emperor Series
Used - Like New
Paperback
HarperCollins Publishers
2013-09-26
512
N/A
Book picture is for illustrative purposes only, actual binding, cover or edition may vary.
The book has been read, but looks new. The book cover has no visible wear, and the dust jacket is included if applicable. No missing or damaged pages, no tears, possible very minimal creasing, no underlining or highlighting of text, and no writing in the margins
Trustpilot