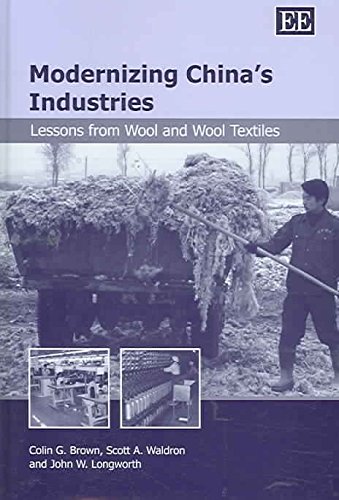 Exposed to powerful new economic forces, and undergoing dramatic ownership reforms and technological changes, China's industries are modernizing at a breakneck pace. This book analyses the transformation and modernization of China's industries through a detailed investigation of the wool and wool textile industries.

Exposed to powerful new economic forces, and undergoing dramatic ownership reforms and technological changes, China's industries are modernizing at a breakneck pace. In many industries, the outcomes have been chaotic and poorly aligned with societal objectives. This book analyses the transformation and modernization of China's industries through a detailed investigation of the wool and wool textile industries. The authors argue that to remain internationally competitive in the post WTO accession era, Chinese industries need to confront a critical new phase in the modernization process - that of improving management practices and industry co-ordination. Modernizing China's Industries is a comprehensive, integrated and in-depth investigation of industry transformation and modernization. The extensive first-hand research, across a range of industry segments and participants, spans almost two decades. The analysis reveals much about industry modernization and transition in China for a broad range of industries and therefore provides invaluable information for developing strategies and accessing opportunities within China. This book offers unique insights for academics and researchers in Asian studies, transition studies and industrial transformation, as well as policymakers and industry leaders interested in both the intricacies and mega-forces involved in China's industrial modernization. The comprehensive industry analysis also provides a valuable reference for professionals in the increasingly China-centric world of wool and wool textiles as well as offering insights for other textile industry professionals.
'The book fills an important gap in understanding the process of economic transformation by providing a comprehensive and in-depth micro-level analysis of industrial transition. . . The book is highly recommended for those who are working on or studying the Chinese economic transformation focusing especially on industry and its transition.' -- Ligang Song, Economic Record
'As the authors admit, "the wool industry may seem a rather obscure choice" (p. 23). Yet this is a book of interest to a much wider relationship than agro-business specialists. It provides a meticulous case-study of one industry which illuminates a number of broader issues currently under discussion in the China studies field. . . As the Chinese economy becomes more variegated, economists and political scientists trying to understand the Chinese economic reform experience will increasingly have to rely on such studies. They bring out the intricacies of this process and help us to move from across-the-board generalizations on property rights reform to more nuanced analyses of economic transition.' -- Bjoern Alpermann, The China Journal
'China defies generalizations, and the only way that we can hope to obtain a clear idea of the process of reform is through detailed studies, that trace the complex ebb and flow of reforms, including the interactions between centre and locality, and between the stages of the processing. This is a valuable study that will stand the test of time.' -- Will Martin, The World Bank, US
'This book is more than "yet another industry report". This is a book on transition. It describes the mega-forces - privatization; state-owned enterprise reform; internationalization; increasing competition - and their mega-consequences - the proliferation of small, private traders; the diversification of the process sector; the disintegration of government agencies and private initiatives that had been in charge of coordinating and managing quality - that not only affected the wool sector, but are literally re-defining the fabric of China's economy. For those interested in trying to better understand the fastest growing economy in the world, this is a must read. Neither the authors' competence in wool technology nor their description of the institutional details of the wool economy gets in the way of their main message. Powerful economic forces are at work in China. In some cases there are positive benefits - through competitive and improved incentives. In other cases, however, there is a cost in terms of rising transaction costs, imperfect information and the inability to rationalize the evolving supply chains.' -- Scott Rozelle, University of California, US
'China is the world's largest producer and consumer of wool textiles but the structure of its industry remains confusing and complex to many. While China offers the most important growth opportunity in the world today, the transition from a centrally planned to a market economy has compounded the difficulties and risks for many traders and investors wishing to deal with and in this market. This publication makes a major contribution towards unravelling the complexity of Chinese industrial structures through its review of recent changes to one of China's oldest but still significant manufacturing sectors, the wool textile industry. The lessons learned through this study will be relevant to anyone wishing to understand China's industrial modernization processes.' -- Barry White, Chief Executive Officer, International Fibre Council (IFC) Ltd, Director, Australia China Business Council
Colin G. Brown, Scott A. Waldron and John W. Longworth, The University of Queensland, Australia
Contents: Preface 1. Mega-forces and Mega-consequences 2. Wool Textiles and Industry Transformation 3. Evolving Institutions 4. Changing Marketing Channels 5. Restructuring the Processing Sector 6. ReformingTrading Arrangements 7. Redesigning Domestic Raw Material Supply Chains 8. Reorganizing Domestic Raw Material Production 9. Understanding and Improving Industry Transformation References Index
NPB9781843765912
9781843765912
1843765918
Modernizing China's Industries: Lessons from Wool and Wool Textiles by Colin G. Brown
Colin G. Brown
New
Hardback
Edward Elgar Publishing Ltd
2005-07-27
256
N/A
Book picture is for illustrative purposes only, actual binding, cover or edition may vary.
This is a new book - be the first to read this copy. With untouched pages and a perfect binding, your brand new copy is ready to be opened for the first time
Trustpilot