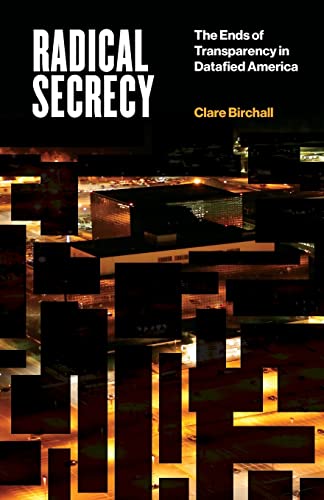 Radical Secrecy: The Ends of Transparency in Datafied America by Clare Birchall

Reimagining transparency and secrecy in the era of digital data

When total data surveillance delimits agency and revelations of political wrongdoing fail to have consequences, is transparency the social panacea liberal democracies purport it to be? This book sets forth the provocative argument that progressive social goals would be better served by a radical form of secrecy, at least while state and corporate forces hold an asymmetrical advantage over the less powerful in data control. Clare Birchall asks: How might transparency actually serve agendas that are far from transparent? Can we imagine a secrecy that could act in the service of, rather than against, a progressive politics?

To move beyond atomizing calls for privacy and to interrupt the perennial tension between state security and the public's right to know, Birchall adapts Edouard Glissant's thinking to propose a digital right to opacity. As a crucial element of radical secrecy, she argues, this would eventually give rise to a postsecret society, offering an understanding and experience of the political that is free from the false choice between secrecy and transparency. She grounds her arresting story in case studies including the varied presidential styles of George W. Bush, Barack Obama, and Donald Trump; the Snowden revelations; conspiracy theories espoused or endorsed by Trump; WikiLeaks and guerrilla transparency; and the opening of the state through data portals.

Postsecrecy is the necessary condition for imagining, finally, an alternative vision of the good, of equality, as neither shaped by neoliberal incarnations of transparency nor undermined by secret state surveillance. Not least, postsecrecy reimagines collective resistance in the era of digital data.

Clare Birchall offers an innovative way out of tired debates over secrecy, transparency, and privacy. Radical Secrecy challenges our assumptions about the state, the neoliberal subject, and data, and it invites us to think about the hard but necessary concepts and strategies that can help us deal with our present and our future.-Mark Fenster, author of The Transparency Fix: Secrets, Leaks, and Uncontrollable Government Information

In this provocative, interdisciplinary, well-researched, and cogently argued critique and reconceptualization of the relationship between secrecy and transparency in the digital age, Clare Birchall articulates the need for reimagining and experimenting with new forms of transparency and open distribution of data, including the 'digital right to opacity.' As we witness political responses to events such as COVID-19, domestic terrorism, and economic devastation, the prescience of her analyses and the importance of her conclusions are undeniable.-Cynthia Stohl, University of California, Santa Barbara

Clare Birchall is reader in contemporary culture in the English department at King's College London. She is author of Shareveillance: The Dangers of Openly Sharing and Covertly Collecting Data (Minnesota, 2018) and Knowledge Goes Pop: From Conspiracy Theory to Gossip.

1. The Changing Fortunes of Secrecy and Openness

5. Aesthetics of the Secret

6. Secrets of the Left: A Right to Opacity

NPB9781517910433
9781517910433
1517910439
Radical Secrecy: The Ends of Transparency in Datafied America by Clare Birchall
Clare Birchall
Electronic Mediations
New
Paperback
University of Minnesota Press
20210406
264
N/A
Book picture is for illustrative purposes only, actual binding, cover or edition may vary.
This is a new book - be the first to read this copy. With untouched pages and a perfect binding, your brand new copy is ready to be opened for the first time
Trustpilot