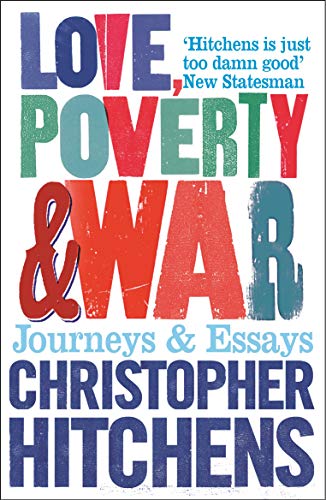 In this sweeping collection of essays, reportage and criticism, Hitchens' polemical talents at their most fearsome.

Love, Poverty and War: Journeys and Essays by Christopher Hitchens

In this sweeping collection of essays, reportage and criticism, Hitchens' polemical talents at their most fearsome.

Love, Poverty and War: Journeys and Essays showcases the Hitchens' rejection of consensus and cliche, whether he's reporting from abroad in Indonesia, Kurdistan, Iraq, North Korea, or Cuba, or when his pen is targeted mercilessly at the likes of William Clinton, Mother Theresa ("a fanatic, a fundamentalist and a fraud"), the Dalai Lama, Noam Chomsky, Mel Gibson and Michael Bloomberg.

Hitchens began the nineties as a "darling of the left" but has become more of an "unaffiliated radical" whose targets include those on the "left," who he accuses of "fudging" the issue of military intervention in the Balkans, Afghanistan and Iraq. Yet, as Hitchens shows in his reportage, cultural and literary criticism, and opinion essays from the last decade, he has not jumped ship and joined the right but is faithful to the internationalist, contrarian and democratic ideals that have always informed his work.

Dazzling, and often very moving, writing from the 1990s by 'one of the most prolific, as well as brilliant, journalists of our time * Observer *
An exceptional political polemicist * Prospect *
Hitchens is just too damn good. * New Statesman *
Christopher Hitchens (1949-2011) was a contributing editor to Vanity Fair and a columnist for Slate. He was the author of numerous books, including works on Thomas Jefferson, Thomas Paine, George Orwell, Mother Teresa, Henry Kissinger and Bill and Hillary Clinton, as well as his international bestseller and National Book Award nominee, god Is Not Great. His memoir, Hitch-22, was nominated for the Orwell Prize and was a finalist for the National Book Critics Circle Award.
GOR002775545
9781843544524
1843544520
Love, Poverty and War: Journeys and Essays by Christopher Hitchens
Christopher Hitchens
Used - Very Good
Paperback
Atlantic Books
2006-06-01
496
N/A
Book picture is for illustrative purposes only, actual binding, cover or edition may vary.
This is a used book - there is no escaping the fact it has been read by someone else and it will show signs of wear and previous use. Overall we expect it to be in very good condition, but if you are not entirely satisfied please get in touch with us
Trustpilot