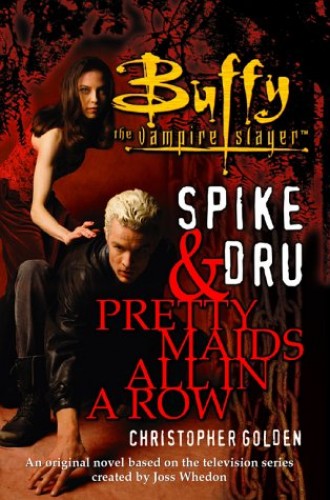 Spike and Dru by Christopher Golden

Set during World War II, Spike and Dru is a prequel to "Buffy the Vampire Slayer", explaining how the current Slayer and all subsequent Slayers were almost wiped out when Spike and Dru gained knowledge of the Council's procedures and personnel.

Spike and Dru: Pretty Maids All in a Row by Christopher Golden

..."You got
Slayer problems.
You know what I
find works real good with
Slayers? Killing them."

"Oh yeah, I did a couple Slayers in my
time. Don't like to brag. Oh, who am I kidding,
I love to brag. There was one Slayer, during the
Boxer Rebellion..."

"We like to talk big, vampires do. 'I'm gonna destroy
the world, ' -- just tough-guy talk, strutting around
with your friends over a pint of blood...Truth is, I
like this world. You got dog racing, Manchester
United, "Love Boat," and you got people.
Billions of people walking around
like Happy Meals
with legs..."

In the second hardcover installment of the bestselling "Buffy the Vampire Slayer(TM) " series, Christopher Golden, coauthor of "The Watcher's Guide" ("fans will suck this tome dry" -- "Entertainment Weekly)" and "Immortal" ("Golden and Holder smartly expand upon the show's slangy lingo [and] display deep insight into the characters." -- "Entertainment Weekly)," presents a unique supernatural tale that finds fan-favorite demon lovers Spike and Drusilla wreaking havoc throughout war-torn Europe as only they can. As long as there have been demons, there have been Slayers. But Slayers have short life expectancies and high mortality rates. Which is why there exists a list of

"Pretty Maids All in a Row"

It's 1940, and Europe is ravaged by World War II -- an ideal environment for two gleefully destructive monsters. Drusilla's birthday -- that is, the anniversary of her resurrection as a vampire -- impends and her devoted paramour Spike wants to celebrate in style. What more perfect a gift than the legendary necklace known as Freyja's Strand-- a chain of metal so potently magical that it instantly imbues its wearer with the ability to shape-shift at will? The problem is, no one's sure that the bauble even exists.

Until Spike learns of a demon named Skrymir, who claims not only to possess the necklace, but is willing to trade.

Skrymir's true desire is to be rid of the most persistent thorns in his side, the Watchers' Council and the Slayer, so that he can implement his vision of world domination. Spike's task is to infiltrate Council head-quarters and get his hands on the list of all young women currently in training to take over as Slayer should they be called. In exchange for the necklace, Spike must kill the current Slayer, a brazen young woman named Sophie, as well as all of the Slayers-in-Waiting that exist -- the "pretty maids all in a row."

To Spike, this sounds like fun, and he sets off on a spree.

Sophie and her Watcher, Yanna, are determined to stop whoever has been slaughtering all of the potential Slayers. If Spike and Drusilla succeed with their plans of bloodlust and power, it could mean the end of the Chosen One -- "all" of the Chosen Ones -- forever...

GOR001727710
9780743400466
0743400461
Spike and Dru: Pretty Maids All in a Row by Christopher Golden
Christopher Golden
Buffy the Vampire Slayer S.
Used - Very Good
Hardback
Simon & Schuster
2000-11-06
352
N/A
Book picture is for illustrative purposes only, actual binding, cover or edition may vary.
This is a used book - there is no escaping the fact it has been read by someone else and it will show signs of wear and previous use. Overall we expect it to be in very good condition, but if you are not entirely satisfied please get in touch with us
Trustpilot