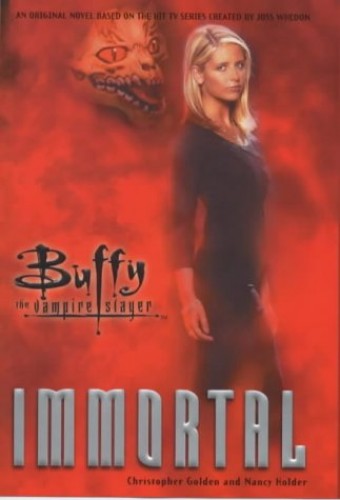 When Buffy encounters a vampire who is willing to sacrifice herself to let her companions escape, she doesn't have time to ponder the demon's uncharacteristic behaviour as she stakes it and watches its body explode to dust. It's dead and that's what matters. Or so she thinks.

In the first hardcover installment of the bestselling "Buffy the Vampire Slayer" series, Christopher Golden and Nancy Holder, coauthors of "The Watcher's Guide" ("Fans will suck this tome dry" -- "Entertainment Weekly)," present a supernatural tale that pits Buffy against the deadliest vampire yet: one who is..."Immortal."

During a routine slaying, Buffy Summers runs into a small group of vampires who seem to be out for more than the usual bite-and-suck. As the vamps scatter, one of them stays behind, willing to sacrifice itself to help the others escape. Though surprised -- vampires aren't exactly known for their generosity -- the Slayer doesn't waste time pondering the demon's motivation and kills it.

Or so she thinks.

But the next night a new vampire confronts the Chosen One and her friends. One who knows Buffy's name and can anticipate her basic attack. One who doesn't have the proper respect for Mr. Pointy. One whose name is Veronique.

"She cannot die. Strike her down, but like the night she will always come again. And she will bring forth the end of Man...."

Every time Buffy kills her, Veronique rises again in a new body.

"Great. Instant replay." An invincible demon is the last thing the Slayer needs right now. Joyce Summers is about to undergo a serious operation, calling up all of her daughter's fears about her own mortality. Angel wants to comfort Buffy, but her mother's crisis underscores the difference between them: he will live forever, while she will grow old...or die young.

Torn between her duties as a daughter and as the Chosen One, Buffy will need the support of her friends to help her solve a rash of grave robberies, head off an influx ofnew vampires, and take Veronique down, once and for all.

For Veronique is on a mission -- to bring about the unification of her masters. the Triumverate, into one all-powerful demon who will drink the blood of the last man on earth....

GOR002815057
9780671041175
0671041177
Immortal by Christopher Golden
Christopher Golden
Buffy the Vampire Slayer S.
Used - Very Good
Hardback
Simon & Schuster
1999-11-15
352
N/A
Book picture is for illustrative purposes only, actual binding, cover or edition may vary.
This is a used book - there is no escaping the fact it has been read by someone else and it will show signs of wear and previous use. Overall we expect it to be in very good condition, but if you are not entirely satisfied please get in touch with us
Trustpilot