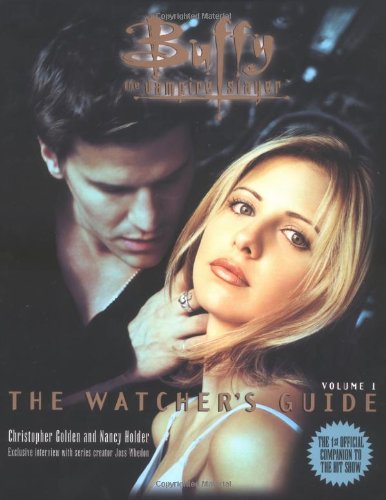 Based on "Buffy", the American television series for teenagers which combines humour with horror, this book presents profiles, interviews and background information about the series, its cast and its creators.

As long as there have been vampires, there has been the Slayer. One girl in all the world, to find them where they gather and to stop the spread of their evil and the swell of their members. She is the Slayer.

A Walking Tour of Sunnydale's Hot Spots (both of them)

The Slayer Handbook (according to Buffy Summers)

Character Guide-- who knew what and when?

Playlist-- what song did Buffy and Xander slow dance to?

Don't Try This at Home-- an interview with the show's stunt coordinator!

The Monsters, The Mythology, The Villains, The Victims, The Fashion

Don't be caught dead without "The Watcher's Guide".

GOR000451004
9780671024338
0671024337
Buffy: The Watcher's Guide: v. 1 by Christopher Golden
Christopher Golden
Buffy the Vampire Slayer S.
Used - Very Good
Paperback
Simon & Schuster
1998-10-24
304
N/A
Book picture is for illustrative purposes only, actual binding, cover or edition may vary.
This is a used book - there is no escaping the fact it has been read by someone else and it will show signs of wear and previous use. Overall we expect it to be in very good condition, but if you are not entirely satisfied please get in touch with us
Trustpilot