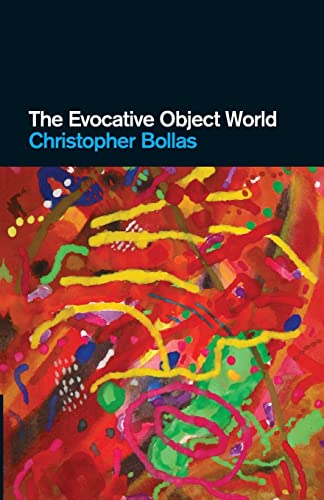 Builds on Freud's account of dream formation, combining it with perceptive clinical, theoretical and cultural insights to show how the psychoanalytical method can provide a rich understanding of what has traditionally been regarded as 'the outside world'. This title rejects the simplistic notion that mental life is unconsciously determined.

In The Evocative Object World Christopher Bollas builds on Freud's account of dream formation, combining it with perceptive clinical, theoretical and cultural insights to show how the psychoanalytical method can provide a rich understanding of what has traditionally been regarded as 'the outside world'.

Moving from the fundamentals of the free associative technique, through an examination of how architecture and the built environment interact with individual and societal dream life, Bollas extends the work of psychoanalysis beyond relations with literature and culture to the actual objects which surround us.

As with the evocative external structures of our environment, Bollas describes how the family, with its inherited genetic structures, likewise constitutes a pre-existent unconscious formation into which we are placed, and demonstrates that there is more to this multifaceted unit than the traditional psychoanalytical notion of the Oedipal triangle.

In the process, Bollas also provides a fascinating and comprehensive review of how his own theories have evolved over the past three decades: a period during which, in his view, Western society has increasingly neglected - or even become actively hostile towards - unconscious life.

Throughout this engaging and accessible text, Bollas rejects the simplistic notion that mental life is unconsciously determined. Instead he provides a compelling study of how unconscious life is shaped by a diverse array of both internal and external factors, and how the work of the Freudian pair provides the best means to gain insight into our dreams, our surroundings, our families - and our mental life as a whole.

"I very much enjoyed reading these books [referring to both companion volumes]. There is something in the form of Bollas's writing - in his character - that permeates these texts: a curiosity and passion for the unconscious life that never loses sight of its complexity. I wish that these books had existed while I was still in my training seminars, and I can only hope that they are going to be read both by students and experienced analysts over and over again. They contain a world to discover, much like unconscious life itself. They invite and stimulate the reader to deepen his or her unconscious creativity. The books have stimulated my curiosity and made me eager to try and learn more from my patients." - Anna Sylven, The Scandinavian Psychoanalytic Review, Vol. 31, 2008

"...the experience of reading these books [referring to both companion volumes] is quite extraordinary. Beautifully written and evocatively simple, they incite the imagination and, mirroring his proposed psychoanalytic method, seem to invite the reader to muse and daydream... Perhaps Bollas' most important contribution to clinical practice is that he reminds therapists to listen, to both the significant and the seemingly insignificant, and to get lost in the unconscious process at least sufficiently to evoke the object world and to keep questioning." - Carol Long, Psycho-analytic Psychotherapy in South Africa, Vol. 17 No. 1, 2009

"Christopher Bollas's illuminating and original [work] ...is particularly valuable for the vividness with which it describes, not just analytic ideas, but what actually happens in the consulting room....a rigour, an intuitive boldness and a seriousness that might convert any critic of psychoanalysis." - The Listener

"Christopher Bollas [has] been writing some of the most innovatory psychoanalytic theory of the last few years...What is distinctive about Bollas's work is his commitment to the unconscious-the unconscious of everyday life-without becoming speechless or too mystical in the process...One of the bemusing things about this remarkable book is that it is at once genuinely radical and curiously comforting." - The London Review of Books

"The fate of psychoanalysis as a viable mode of thought about human concerns now may rest with a few gifted writers who practice it, notably Christopher Bollas and Adam Phillips. Bollas's latest eollection of essays illustrates well his impressive knack for mining theory and his own practice for insights and stories whose force does not depend on the reader's interest or belief in psychoanalysis." - The San Francisco Chronicle

"Christopher Bollas conveys as good an impression as we are likely to get of the psychoanalytical process in action...Bollas has given us a sparkling collection of essays which combine perceptive precision with playful, almost black humour." - TLS

"Christopher Bollas draws on decades of clinical experience...and excites the imagination. His blend of theoretical speculation and clinical material is heady stuff...Bollas puts the passion back into the drama of childhood: some of what he says seems startling...makes me wish I could have read this 20 years ago." - The Guardian

"This erudite neo-Freudian study explores how each individual develops an idiom of the unconscious, a personal way of conveying one's inner experiences." - Publishers Weekly

"Bollas's own vision is one of gifted periphery and the book itself becomes a play space of creative voices and communications." - Journal of Religion and Health

"At the heart ...Bollas's project as a writer, analyst and activist, is something profoundly optimistic: his belief in the creative and curative capacities of the unconscious in even the darkest personal and cultural situations." - Psychotherapy and Politics International

Introduction. Acknowledgements. Free Association. Architecture and the Unconscious. The Evocative Object World. The Fourth Object and Beyond.