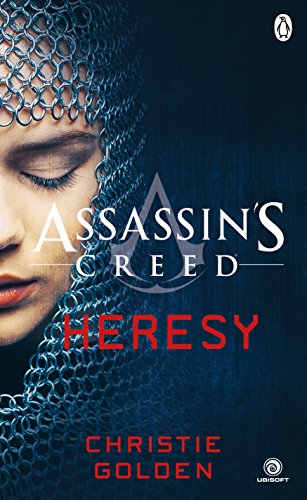 The new book set in the universe of Assassin's Creed. Reliving the memories of his ancestor who fought beside Joan of Arc, high-ranking Templar Simon Hathaway slowly uncovers secrets of the past that could dangerously impact his present . . . and that of the entire Templar order.

An endless conflict. An old wrong. A new revelation.

But Simon also has an insatiable curiosity, and is fascinated by the thought of experiencing history first-hand through his ancestor Gabriel Laxart, who fought alongside the legendary Joan of Arc.

When he enters the newly-designed Animus for its initial project, Simon finds himself unprepared for what he discovers: how deep the conflict between the Templars and the Assassins goes, and what his ancestor is willing to do for the woman he loves. And as he slowly uncovers secrets of the past, Simon is confronted with the most dangerous truth of all:

Who is the heretic . . . and who is the true believer?

Award-winning and eight-time New York Times bestselling author Christie Golden has written nearly fifty novels and several short stories in the fields of science fiction, fantasy and horror. Among her many projects are over a dozen Star Trek novels, World of Warcraft and StarCraft novels, three books in the nine-book Star Wars series, Fate of the Jedi, and the novelization of Star Wars: The Clone Wars unaired episodes.
GOR008380466
9780718186982
0718186982
Heresy: Assassin's Creed Book 9 by Christie Golden
Christie Golden
Assassin's Creed
Used - Very Good
Paperback
Penguin Books Ltd
2016-10-31
432
N/A
Book picture is for illustrative purposes only, actual binding, cover or edition may vary.
This is a used book - there is no escaping the fact it has been read by someone else and it will show signs of wear and previous use. Overall we expect it to be in very good condition, but if you are not entirely satisfied please get in touch with us
Trustpilot