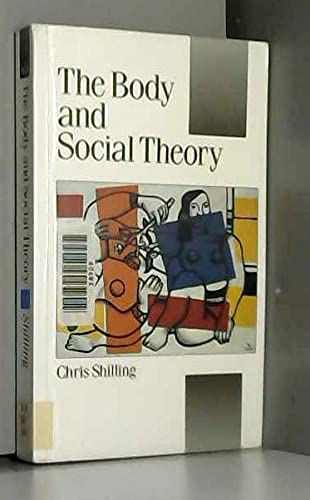 The Body and Social Theory by Chris Shilling

For academics and students in sociology, medical sociology, anthropology and culture and leisure studies, this book critically examines social theories of human embodiment, providing an innovative analysis of the relationship between the body, self-identity and death in late modernity.

The Body and Social Theory by Chris Shilling

This clear, critical analysis of the new sociological literature on the body provides an introduction to the most important traditions of thought which have informed social theories of human embodiment.

`It is [Shilling's] intention to "embody sociology": to review and develop exisiting theories of the body, and also to demonstrate how the body has been, and is, present in sociology. Shilling accomplishes both tasks gracefully, with a deft interlacing of the major theorists and the principal body topics: gender, age, and color. This organization is felicitous, avoiding the interminable lists of either theorists or topics, and he firmly establishes the body as a viable topic in social theory, no longer to be forgotten.... This is a useful readable, and timely volume, which I would strongly recommend both for courses on the sociology fo the body and for courses on social theory. It offers a central and personal theme that permeates and integrates the work of such major twentieth century theorists as Douglas, Goffman, Foucault, Bourideu and Giddens, not only with each other, but also with somatic theorist like Elias, Turner, and Frank. Furthermore, it provides a fresh perspective on such issues as age, color, class, gender, and health, which are, after all, the stuff of sociology and of life itself' - Contemporary Sociology

`Recently, there has been a considerable increase in academic interest in the body to the extent that it has now become something of a fashionable trend. For those who are confused as to the nature of the major arguments and why they might be important, help is at hand with this book. In it Shilling explores the place of the body and how it has been theorized in sociology.... a lucid book, which makes a useful contribution to, what sometimes might appear to be, a confusing area of study' - British Journal of Sociology

`Well worth a read. It has something to say, which is worth saying and it says it well' - Sociology

`Scholars and teachers can be grateful to Chris Shilling for an incisive survey of how the body motivates contemporary social theory and social theory's various contributions to understanding the body. Shilling does not attempt a new theory of the body, but he organizes a wide range of sociological work into a cohesive interview. He offers lucid summaries of others' theories, valuable critiques of different theorists, and useful criteria for future theorising about the body. His book should enjoy wide use as a core text in sociology of the body courses, or as a supplementary text in social theory or social psychology courses' - Body & Society

`A thoughtful, readable and quite persuasive text.... It is a provocative text which covers a large theoretical terrain. Moreover, it both produces a range of contemporary theories on embodiment and marks out its own (cogent) position within them. For this reason it is sure to stand out amongst texts on embodiment for some time to come' - Body & Society

`The chapters on Bourdieu and Elias are particularly good. They are clear, persuasive and insightful.... the book is well worth a read. It has something to say, which is worth saying, and it says it well' - Sociology

`Essential to any collection of work on the body, health and illness or social theory' - Choice

`Shilling has a sophisticated appreciation of the philosophical problems facing a sociology of the body. His book is probably one of the best summaries of the various developments and problems of the modern sociology of the body. Thus he provides us with a stimulating analysis of Bourdieu, Giddens and Norbert Elias. His analysis offers a cogent account of the relationship between naturalistic and sociological studies of human embodiment and he is acutely perceptive of the importance of the complex dialectic between social institutions, culture and biological conditions. His approach is heavily influenced by the work of Giddens on modernity and the reflexive self, and his study is at its most creative when he examines the problem of death in modern societies as a negation of the self as a project. Shilling's study will prove to be an excellent textbook for sociologists working, not only in the area of the sociology of the body, but on related topics such as the sociology of the emotions, the sociology of ageing and medical sociology...Shilling (is) correct to suggest that rather than seeking a sociology of the body, the body should become a necessary theme of all sociological analysis because we could not understand the nature of social action without an adequate conceptualisation of the self' - The Times Higher Education Supplement

`a comprehensive and lucid introduction to this exciting and developing area within modern social thought. It shows how these developments can contribute to wider theoretical debates within sociology, especially those to do with social constructionism and approaches to social inequalities. There are stimulating and original discussions' - David Morgan, Department of Sociology, University of Manchester

`The Body and Social Theory cleverly steers between naturalistic and constructionist accounts of the body's sexuality, shaping, medicalization and civilization to treat the body within the problematic of modernity (control and uncertainty). Through succinct analyses of the work of Turner, Giddens, Goffman, Berger, Foucault, Bourdieu and Elias, Chris Shilling shows how the body's symbolic capital is employed to invest class, ethnicity, gender and race with their distinctive aesthetics. This is an invaluable guide to social studies of body behaviour.' - John O'Neill, Department of Sociology, York University, Toronto

`We all pay lip service to the interaction between mind and body, but does it make sense to think about ourselves in that way? Are we biological organisms with a veneer of social polish, or are the social and the biological intimately intertwined? Chris Shilling does a great service to contemporary thought by pulling together relevant research, and theorising on such questions. His account demonstrates that it is the social scientists who are giving the most thought to how to integrate social and biologcal research in a meaningful way' - New Scientist

Chris Shilling is Professor of Sociology in SSPSSR at the University of Kent at Canterbury, UK. Having completed a BA in Politics and an MA in Social and Political Thought at the University of Sussex, he was awarded his PhD in the Sociology of Education at The Open University. Growing increasingly dissatisfied with cognitive conceptions of agency and disembodied theories of social and cultural processes, his research and writing from the late 1980s has sought to contribute to the embodiment of sociology and sociological theory and to promote the interdisciplinary field of 'body studies.' He has lectured widely in Europe and North America, has written on embodiment in relation to a wide range of substantive issues (from religion, archaeology, sport, music and health and illness, to work, survival, technology and consumer culture) and his publicationshave been translated into a number of different languages. Chris Shilling's major books include Changing Bodies: Habit, Crisis and Creativity (Sage, 2008), Embodying Sociology: Retrospect, Progress and Prospects (editor, Blackwells, 2007), The Body in Culture, Technology and Society (Sage, 2005) and, with Philip A. Mellor, The Sociological Ambition (Sage, 2001) and Re-forming the Body. Religion, Community and Modernity (Sage, 1997). He is currently editor of The Sociological Review Monograph Series and is continuing to research and write on embodiment as a foundational grounding for social thought and social research.
Introduction The Body in Sociology The Naturalistic Body The Socially Constructed Body The Body and Social Inequalities The Body and Physical Capital The Civilized Body The Body, Self-Identity and Death Concluding Comments
GOR001387669
9780803985865
080398586X
The Body and Social Theory by Chris Shilling
Chris Shilling
Published in association with Theory, Culture & Society
Used - Very Good
Paperback
SAGE Publications Ltd
1993-06-10
240
N/A
Book picture is for illustrative purposes only, actual binding, cover or edition may vary.
This is a used book - there is no escaping the fact it has been read by someone else and it will show signs of wear and previous use. Overall we expect it to be in very good condition, but if you are not entirely satisfied please get in touch with us
Trustpilot