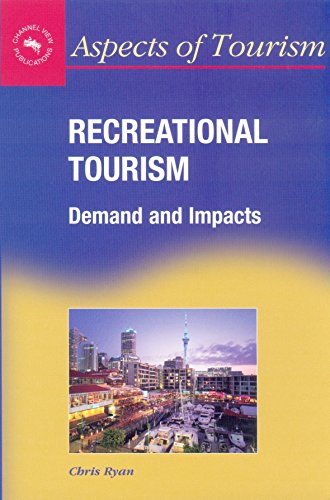 A decade after the first edition of this book established itself as one of the major books that covered the nature of the demand for tourism, and the implications of that demand, this second edition represents a significant updating of material that reflects contemporary thinking.

Chris Ryan, as editor of Tourism Management, the author of several books and a researcher with an international reputation, has revisited his book, Recreational Tourism, after a gap of more than ten years. This new edition is an appraisal of that which is still thought to be valid, but with a significant updating in the light of new research. The structure of the book has been slightly changed to better reflect, not only current thinking, but the nature of existing texts and the greater degree of specialisation that now exists in the tourism literature. The book is primarily concerned with the determinants of tourism demand, the implications of that demand, and the problems posed for those who, in whatever capacity, seek to manage tourism at the destination level. After a new chapter that presents a history of tourism where the discerning reader can see that which is old and that which is new, the rest of the book analyses social, economic and psychological determinants of demand and discusses the broad aspects of destination change and the challenges presented to those responsible for managing such change. The book represents a learned introduction to the subject, a review of the developing literature and thinking that can be classified as broadly postpositivistic. In a curious manner it represents a return to the conventional, but within a new awareness of competing interpretations of one of the leading economic drivers of the new millennium.

Chris Ryan is Professor of Tourism at the University of Waikato, New Zealand. He is editor of Tourism Management, a member of the International Academy for the Study of Tourism, and has taught in New Zealand, Australia, the United Kingdom and Canada. As an active researcher, his published material numbers over 200 papers, articles and books. In 1999 one of his papers was awarded an Anbar rating for excellence. At a governmental level Chris has worked on various committees and at the time of publication was a member of the New Zealand Ministry of Tourism's Special Project Committee on dissemination of research and statistics.

GOR003739864
9781873150566
1873150563
Recreational Tourism: Demands and Impacts by Chris Ryan
Chris Ryan
Aspects of Tourism
Used - Good
Paperback
Channel View Publications Ltd
20030529
368
N/A
Book picture is for illustrative purposes only, actual binding, cover or edition may vary.
This is a used book - there is no escaping the fact it has been read by someone else and it will show signs of wear and previous use. Overall we expect it to be in good condition, but if you are not entirely satisfied please get in touch with us
Trustpilot