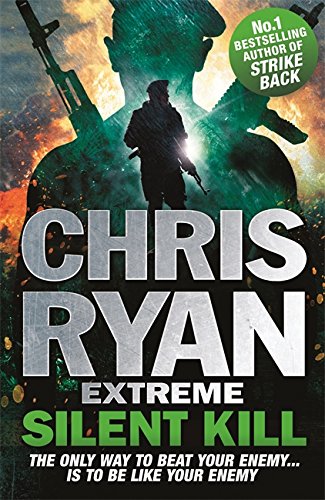 The Chris Ryan Extreme books take you even further into the heart of the mission with more extreme action, more extreme language and more extreme pace. Like Call of Duty or Medal of Honour you'll feel part of the team.

Chris Ryan Extreme: Silent Kill has previously been published as four separate shorter missions. Now in one book to keep you at the heart of the action.

Northern Ireland, 1993. For high-flying MI5 officer Avery Chance the real war has only just begun. When Chance is abducted by the IRA's notorious Nutting Squad, her hopes lie in the hands of a young SAS recruit who must risk everything to bring her home.

Twenty years after his act of self-sacrifice in Belfast ex-SAS legend John Bald is a scarred shadow of his former self. But when a face from the past appears and rescues him from deep trouble, Bald is offered one last shot at redemption. His target is Kurt Pretorius, a ruthless mercenary operating deep in the wilds of war-ravaged Somalia.

In a world where rogue mercenaries operate beyond the reach of the law, Kurt Pretorius has transformed himself into a god. It is up to Bald to stop Pretorius before he turns Somalia into a terrorist haven. But Bald quickly finds himself sucked into a twisted game of survival, where the stakes could not be higher - and the price of failure is his life...

Nobody takes you to the action better than Ryan, because he's the real deal, and this muscle-and-bone thriller will have fans' blood pumping. * Evening Standard *
Ryan chooses fiercely up-to-the-minute plots, and laces them with an exceptional eye for detail and insider knowledge ... Fearsome and fast-moving ... much more than a conventional thriller. * Daily Mail *
Chris Ryan has always been underrated as a novelist of ideas... a welter of treachery and mayhem. * Daily Telegraph *
Former SAS corporal and the only man to escape death or capture during the Bravo Two Zero operation in the 1991 Gulf War, Chris Ryan turned to writing thrillers to tell the stories the Official Secrets Act stops him putting in his non-fiction. His novels have gone on to inspire the Sky One series Strike Back. Born near Newcastle in 1961, Chris Ryan joined the SAS in 1984. During his ten years there he was involved in overt and covert operations and was also sniper team commander of the anti-terrorist team. During the Gulf War, Chris Ryan was the only member of an eight-man unit to escape from Iraq, where three colleagues were killed and four captured. It was the longest escape and evasion in the history of the SAS. For this he was awarded the Military Medal. He wrote about his experiences in the bestseller The One That Got Away, which was adapted for screen, and since then has written three other works of non-fiction, over twenty bestselling novels and a series of childrens' books.
GOR007056454
9781444756883
1444756885
Chris Ryan Extreme: Silent Kill: Extreme Series 4 by Chris Ryan
Chris Ryan
Chris Ryan Extreme
Used - Very Good
Paperback
Hodder & Stoughton General Division
2015-10-08
352
N/A
Book picture is for illustrative purposes only, actual binding, cover or edition may vary.
This is a used book - there is no escaping the fact it has been read by someone else and it will show signs of wear and previous use. Overall we expect it to be in very good condition, but if you are not entirely satisfied please get in touch with us
Trustpilot