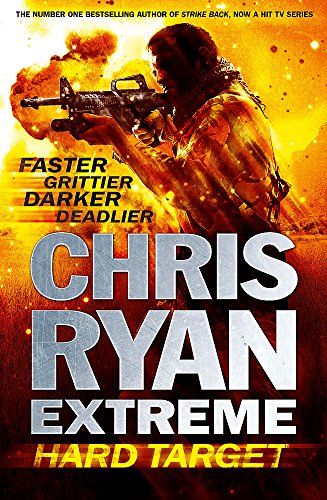 The first book in the Chris Ryan Extreme series.Former SAS Warrant Officer Joe Gardner has fought the Regiment's deadliest enemies, in some of the most desolate places on earth. And he's always won. Now he's about to face his toughest challenge yet.

After losing his hand whilst on a covert operation in Afghanistan, Gardner is forced to stand down from active duty. Now he lives off the grid. But trouble finds him in the shape of a phone call from an old friend. Ex-Regiment legend John Bald is trapped in a bullet-ridden favela in Rio de Janeiro and a violent gang is out to kill him. Unless Gardner helps, Bald is a dead man.

What begins as a simple rescue mission soon descends into a desperate struggle for survival as Gardner finds himself caught up in a conceit that stretches from the slums of Brazil to the frozen steppes of Siberia. Stalked by elusive MI6 agents and ruthless ex-Blades, Gardner must draw on all his training and instincts to hunt down the hardest target of all - before disaster strikes...
The Chris Ryan Extreme books take you even further into the heart of the mission with more extreme action, more extreme language and more extreme pace. Like Call of Duty or Medal of Honor, you'll feel part of the team.

Chris Ryan Extreme: Hard Target has already been published as four separate shorter missions on ebook. This print edition features a new prequel mission that hasn't been published in ebook.

This high octane tale certainly packs a punch. * News of the World *
Nobody takes you to the action better than Ryan, because he's the real deal. * Evening Standard *
Chris Ryan is as hard as nails. * Mirror *
Former SAS corporal and the only man to escape death or capture during the Bravo Two Zero operation in the 1991 Gulf War, Chris Ryan turned to writing thrillers to tell the stories the Official Secrets Act stops him putting in his non-fiction. His novels have gone on to inspire the Sky One series Strike Back. Born near Newcastle in 1961, Chris Ryan joined the SAS in 1984. During his ten years there he was involved in overt and covert operations and was also sniper team commander of the anti-terrorist team. During the Gulf War, Chris Ryan was the only member of an eight-man unit to escape from Iraq, where three colleagues were killed and four captured. It was the longest escape and evasion in the history of the SAS. For this he was awarded the Military Medal. He wrote about his experiences in the bestseller The One That Got Away, which was adapted for screen, and since then has written three other works of non-fiction, over twenty bestselling novels and a series of childrens' books.
GOR003717130
9781444735970
1444735977
Chris Ryan Extreme: Hard Target: Faster, Grittier, Darker, Deadlier by Chris Ryan
Chris Ryan
Chris Ryan Extreme
Used - Very Good
Paperback
Hodder & Stoughton General Division
2012-01-10
448
N/A
Book picture is for illustrative purposes only, actual binding, cover or edition may vary.
This is a used book - there is no escaping the fact it has been read by someone else and it will show signs of wear and previous use. Overall we expect it to be in very good condition, but if you are not entirely satisfied please get in touch with us
Trustpilot