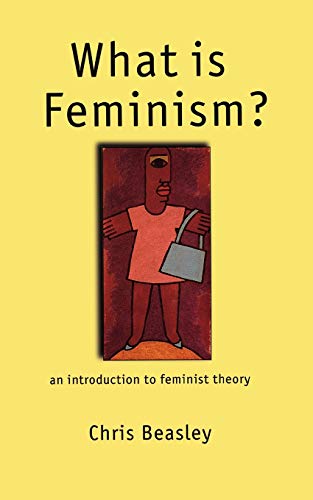 What is Feminism? by Chris Beasley

'Feminist theories and methodologies have become an increasingly complex as well as somewhat fraught terrain where ideas and egos clash productively and destructively. This is an up-to-date, intelligent introduction to a field which remains a vital component of contemporary sociopolitical issues and debates' - Sneja Gunew, University of British Columbia

What is Feminism?: An Introduction to Feminist Theory by Chris Beasley

So what is feminism anyway? Is it possible to make sense of the complex and often contradictory debates?

In this concise and accessible introduction to feminist theory, Chris Beasley provides clear explanations of the many types of feminism. She outlines the development of liberal, radical and Marxist/socialist feminism, and reviews the more contemporary influences of psychoanalysis, postmodernism, theories of the body, queer theory and the ongoing significance of race and ethnicity.

What is Feminism? is a clear and up-to-date guide to Western feminist theory for students, their teachers, researchers and anyone else who wants to understand and engage in current feminist debates.

`Over the last three decades feminist theories and methodologies have become an increasingly complex as well as somewhat fraught terrain where ideas and egos alternately clash productively and destructively. This is an up-to-date and intelligent introduction to a field which remains a vital component of contemporary sociopolitical issues and debates' - Sneja Gunew, Professor of English and Women's Studies, University of British Columbia
Dr. Chris Beasley is Professor in Politics and Co-Director of the Fay Gale Centre for Research on Gender at the University of Adelaide. Dr Beasley primarily teaches in three areas of Political Studies: social and political theory, gender and sexuality studies, and cultural politics. She has been previously been located in Sociology, Women's Studies, Aboriginal Studies and Education. Her books include Heterosexuality in Theory and Practice (with Heather Brook and Mary Holmes, Routledge, 2012), Engaging with Carol Bacchi (edited with Angelique Bletsas, University of Adelaide Press, 2012), Gender & Sexuality: Critical Theories, Critical Thinkers (SAGE, 2005), What is Feminism? (Sage, 1999) and Sexual Economyths (Allen & Unwin, 1994). She is currently writing a book on contemporary popular film titled The Cultural Politics of Popular Film: Power, Culture and Society (with Heather Brook, Manchester UP) and preparing another book, Internet Dating (with Mary Holmes, Routledge). Dr Beasley is also engaged in several research projects, including critical thinking in the first year university experience, embodied ethics and revaluing care, innovations in heterosexuality and hetero-masculinity.
Introduction PART ONE: DEPARTING FROM TRADITIONAL FARE Feminisim's Critique of Traditional Social and Political Thought Feminism's Difference from Traditional Social and Political Thought PART TWO: ACTIVE INGREDIENTS Debates 'Within' Feminism about Feminism Overviews of Feminist Thought PART THREE: WHAT'S ON THE MENU? Starters on the Feminist Menu Liberal, Radical and Marxist/Socialist Feminisms 'Other' Possibilities Feminism and the Influence of Psychoanalysis More on the Menu Postmodernist/Poststructuralist Influences Reassessments and Potentialities Feminists Concerned with Race/Ethnicity Conclusion
GOR002837994
9780761963356
0761963359
What is Feminism?: An Introduction to Feminist Theory by Chris Beasley
Chris Beasley
Used - Very Good
Paperback
SAGE Publications Inc
1999-04-29
192
N/A
Book picture is for illustrative purposes only, actual binding, cover or edition may vary.
This is a used book - there is no escaping the fact it has been read by someone else and it will show signs of wear and previous use. Overall we expect it to be in very good condition, but if you are not entirely satisfied please get in touch with us
Trustpilot