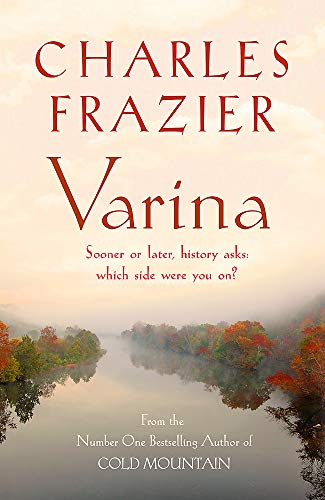 A stunning and timely novel about the chaos and devastation of the American Civil War, as seen through the memories of one woman looking back over it from old age.

The new novel from the number one bestselling author of Cold Mountain - a stunning portrait of the devastation left by the American Civil War, as seen through the eyes of a woman who played a part at the heart of it.

Sooner or later, history asks: which side were you on?

'Beneath the chilling, photogenic story, the writing remains beautiful' - Independent

With her marriage prospects ruined in the wake of her father's financial decline, teenage Varina Howell decides her best option is to wed the much-older widower Jefferson Davis, with whom she expects a life of security as a Mississippi landowner. When he instead pursues a career in politics and is appointed President of the Confederacy, it puts Varina at the white-hot centre of one of the darkest moments in American history - culpable regardless of her intentions.

As the Confederacy prepares to surrender and she finds herself friendless and alone, Varina and her children escape Richmond. With her marriage in tatters and the country divided, they travel south, now fugitives with 'bounties on their heads, an entire nation in pursuit'.

Frazier is a superb prose stylist who elevates the historical fiction genre...his writing can be breathtaking * USA Today *
A splendid historical novel just right for our time * Newsday *
Riveting...this is a sharp evocative novel * Publishers Weekly *
Frazier works on an epic scale, but his genius is in the details - he has a scholar's command of the physical realities of early America and a novelist's gift for bringing them to life * Time *
Frazier is a writer whose spare prose paradoxically oozes atmosphere - you can almost smell the verdant pine trees and hear the crack of the twigs underfoot . . . Beneath the chilling, photogenic story, the writing remains beautiful. * Independent *
Superb...Frazier's historical research generally sits lightly on the story, almost always embedded gracefully in dialogue, a small telling incident or a sharp memory of kindness or brutality. His prose is both of the characters' time and perfectly evocative... A finely wrought novel that will reward re-reading. Elegiac without being exculpatory, it is an indictment of complicity without ignoring the historic complexity of the great evil at the core of American history. * Washington Post *
Clear-sighted depiction of culpable leaders in a divided America. * Guardian *
'[A] fine historical novel ... A strong human story and, in the capable hands of Frazier, the author of Cold Mountain, is both emotionally engaging and rich in historical insights. * Mail on Sunday *
Moving * Sunday Times *
Frazier's elegant prose and vivid, dreamy conjuring of V's youth and her attempted exodus has an air of romance about it ... Fascinating. * New Statesman *
Here's a woman of the Civil War to outshine Scarlett O'Hara * Times *
A visceral, powerfully written evocation both of the beaten South at the nadir and of one of its more unusual survivors. * Daily Mail *
The narrative is sweeping and Frazier has a beautiful style of writing. * Press Association *
Frazier's writing is, as ever, spectacular in place. * Scotland on Sunday *
Elegant, elegiac prose * Sunday Express S Magazine *
Riveting...this is a sharp, evocative novel * Publishers Weekly *
Lively...Frazier is a superb prose stylist who elevates the historical fiction genre. * USA *
Charles Frazier's elegiac novel . . . lyrically resurrects the blasted but hauntingly beautiful Southern landscape just after the war . . . thanks to Frazier's delicate ventriloquism, Varina Davis becomes a marvelously fallible character, complicated enough to stand on her compromised own. * The New York Times Book Review *

Charles Frazier grew up in the mountains of North Carolina. COLD MOUNTAIN, his highly acclaimed first novel, was an international bestseller, selling over one million copies and winning the National Book Award in 1997. It was the inspiration for the Oscar-winning film directed by Anthony Minghella and starring Nicole Kidman, Jude Law, and Renee Zellweger.

A second novel, THIRTEEN MOONS, was published by Sceptre in 2007 and NIGHTWOODS, Charles' latest novel set in a lakeside town in 1960s North Carolina, was published in 2011.

GOR009259426
9781473686137
147368613X
Varina by Charles Frazier
Charles Frazier
Used - Very Good
Hardback
Hodder & Stoughton
2018-09-06
368
N/A
Book picture is for illustrative purposes only, actual binding, cover or edition may vary.
This is a used book - there is no escaping the fact it has been read by someone else and it will show signs of wear and previous use. Overall we expect it to be in very good condition, but if you are not entirely satisfied please get in touch with us
Trustpilot