Without the Moon Cathi Unsworth 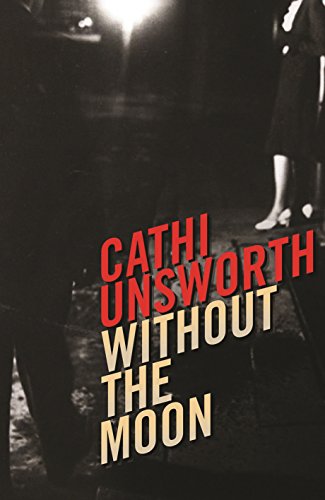 Without the Moon by Cathi Unsworth

Without the Moon by Cathi Unsworth

Hush, hush, hush Here comes the Bogeyman ... London during the long, dark days of the Blitz: a city outwardly in ruins, weakened by exhaustion and rationing. But behind the blackout, the old way of life continues: in the music halls, pubs and cafes, soldiers mix with petty crooks, stage magicians with lonely wives, scandal-hungry reporters with good-time girls - and DCI Edward Greenaway keeps a careful eye on everyone. Out on the streets, something nastier is stirring: London's prostitutes are being murdered, their bodies left mutilated to taunt the police. And in the shadows Greenaway's old adversaries in organised crime are active again, lured in by rich pickings on the black market. As he follows a bloody trail through backstreets and boudoirs, Greenaway must use all his skill - and everything he knows about the city's underworld - to stop the slaughter.
Few people can match her extraordinary capacity to capture the atmosphere of louche, bygone London and the mood of its people. In Without the Moon she tackles the blitzed city of 1942 with the same unerring touch -- Marcel Berlins * The Times (Crime Book of the Month) *
A classic noir novel in every way * The Lady *
The First Lady of noir writing -- David Peace
Unsworth is a chameleon of a writer which allows her to travel to wherever or whenever she wishes ... To my mind she is the love child of Barbara Vine and Daphne DuMaurier -- Chris Simmons * Crimesquad (Book of the Month) *
Using real life material Unsworth has created a brilliant, swirling malestrom of a story... The vision of London after nightfall is amazing, an intermingling of prostitutes, spivs, villains, cops, communists, soldiers, journalists and psychics, hanging out in dark alleys, dodgy bars, seedy hotels -- Doug Johnstone * Independent *
Describing Cathi Unsworth as a crime writer seems limiting, there's so much more to say. * Emerald Street *
A beautifully crafted analogue world, that crackles with tension, atmosphere and human sentiment. Without the Moon is the kind of book you find yourself reading slowly because you don't want to reach the end -- Brony Hegarty * Louder Than War *
...a stunningly atmospheric thriller stuffed to bursting with characters only a city under siege (in more ways than one) could throw up and only a writer as good as Cathi Unsworth could control...Without The Moon is a tour-de-force and would certainly get my vote - not that I have one - in any of the myriad awards for book of the year. -- Mike Ripley * Shots *
Brilliant and brave, Without The Moon blends murder and magic to create a vision of London as a spiritual maze. Prostitutes, psychopaths, detectives, villains and psychics move through its corridors, glimpsing heaven and hell in an atmosphere that is so charged it can almost be touched. Fact and fiction link as justice is demanded. The best work yet from a genuine, original talent. * John King *
Cathi Unsworth hits all the satisfying marks of good noir-ish crime fiction - the pacey, gory plot; the sense of suspense; the vivid characters, but she also has a real knack for setting and place. Unsworth's books are memorable because of her way with popular culture, whether that's the seamy side of 1960s London in Bad Penny Blues or the teen goths trapped in their Norfolk seaside town in Weirdo. -- Anna Fielding * Emerald Street *
The best noir writer we have. * Loud & Quiet *
Cathi Unsworth is a psychic detective who works in the service of the unheard dead. Part Investigative reporter, part ghost hunter and always poetic, she digs through the dregs of history unlocking the long hidden secrets of a criminal underbelly. Her latest tour de force Without the Moon is perfect noir... impossible to put down, yet something wickedly delicious that you can't help but savor. -- Lydia Lunch
I love Cathi Unsworth's writing. Based on two true crimes in war-torn London, Without the Moon is totally gripping. I couldn't put it down and can't recommend this book enough. Read it! -- Martina Cole
Without the Moon is a tense and eerie thriller set during the Blitz. It is full of atmosphere and suspense with an engaging cast of characters, especially DCI Edward Greenaway. I hope he returns soon. -- Peter Robinson
Cathi Unsworth began a career in journalism at nineteen on the music weekly Sounds, and has since worked for many music, arts, film and alternative lifestyle journals. She is the author of four other novels, Weirdo [9781846687938] The Not Knowing [9781852428921], The Singer [9781846686405] and Bad Penny Blues [9781846686788], and the editor of the award-winning crime compendium London Noir, all published by Serpent's Tail. She lives in London.
GOR006753126
9781846689864
1846689864
Without the Moon by Cathi Unsworth
Cathi Unsworth
Used - Very Good
Paperback
Profile Books Ltd
2015-07-09
352
N/A
Book picture is for illustrative purposes only, actual binding, cover or edition may vary.
This is a used book - there is no escaping the fact it has been read by someone else and it will show signs of wear and previous use. Overall we expect it to be in very good condition, but if you are not entirely satisfied please get in touch with us
Trustpilot