The Girl Without a Voice Casey Watson 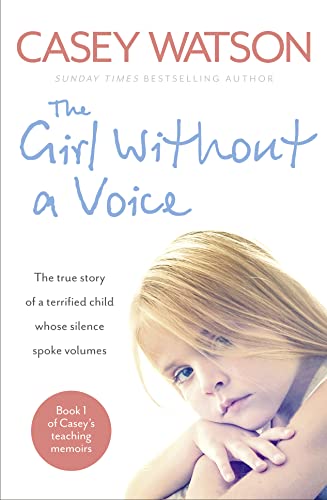 The Girl Without a Voice by Casey Watson

This is the first of several stories about 'difficult' children Casey helped during her time as a behaviour manager at her local comprehensive.

The Girl Without a Voice: The true story of a terrified child whose silence spoke volumes by Casey Watson

This is the first of several stories about 'difficult' children Casey helped during her time as a behaviour manager at her local comprehensive.

Casey has been in the post for six months when thirteen-year-old Imogen joins her class. One of six children Casey is teaching, Imogen has selective mutism. She's a bright girl, but her speech problems have been making mainstream lessons difficult.

Life at home is also hard for Imogen. Her mum walked out on her a few years earlier and she's never got on with her dad's new girlfriend. She's now living with her grandparents. There's no physical explanation for Imogen's condition, and her family insist she's never had troubles like this before.

Everyone thinks Imogen is just playing up - except the member of staff closest to her, her teacher Casey Watson. It is the deadpan expression she constantly has on her face that is most disturbing to Casey. Determined there must be more to it, Casey starts digging and it's not long before she starts to discover a very different side to Imogen's character.

A visit to her grandparents' reveals that Imogen is anything but silent at home. In fact she's prone to violent outbursts; her elderly grandparents are terrified of her.

Eventually Casey's hard work starts to pay off. After months of silence, Imogen utters her first, terrified, words to Casey: 'I thought she was going to burn me.'

Dark, shocking and deeply disturbing, Casey begins to uncover the reality of what Imogen has been subjected to for years.

Casey Watson, who writes under a pseudonym, is a specialist foster carer. She and her husband, Mike, look after children who are particularly troubled or damaged by their past.

Before becoming a foster carer Casey was a behaviour manager for her local comprehensive school. It was through working with these 'difficult' children - removed from mainstream classes for various reasons - that the idea for her future career was born.

Casey is married with two children and three grandchildren.

GOR005853388
9780007510696
0007510691
The Girl Without a Voice: The true story of a terrified child whose silence spoke volumes by Casey Watson
Casey Watson
Used - Very Good
Paperback
HarperCollins Publishers
2014-06-19
304
N/A
Book picture is for illustrative purposes only, actual binding, cover or edition may vary.
This is a used book - there is no escaping the fact it has been read by someone else and it will show signs of wear and previous use. Overall we expect it to be in very good condition, but if you are not entirely satisfied please get in touch with us
Trustpilot