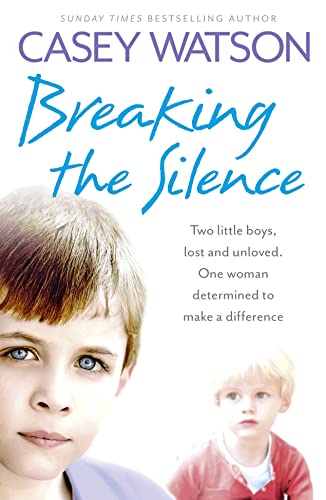 Breaking the Silence by Casey Watson

From the Sunday Times bestselling author comes a true story of two deeply troubled boys both in need of a loving home.

This is the sixth title in the series.

Breaking the Silence: Two little boys, lost and unloved. One foster carer determined to make a difference. by Casey Watson

From the Sunday Times bestselling author comes a true story of two deeply troubled boys both in need of a loving home.

This is the sixth title in the series.

The Watsons are astonished when they answer their front door to find their case worker with a small boy on the doorstep. Jenson is just nine years old. He was removed from his home thirty minutes earlier when it was discovered his mother had left him at home while she went on holiday with her boyfriend.

A couple of weeks later Casey is in for a second shock when she is asked to take a second nine-year-old boy, Georgie. Georgie is autistic and has been in a children's home since he was a toddler. The home is closing and social services need somewhere temporary for him to stay. With her own grown up son, Kieron, having Asperger's (a mild form of autism), Casey knows this is one child she cannot say no to.

The relationship between Jenson and Georgie is difficult from the outset. Jenson is rebellious and full of attitude and he kicks off at anything, constantly winding Georgie up. Georgie doesn't cope well with change and is soon in a permanent state of stress. Despite Casey's best efforts, her innate love for the children is being tested and she begins to question if she can handle Jenson's cruelty.

But overtime it becomes clear that the boys have formed an unlikely bond. Could this be the solution to all of their troubles?

Casey Watson is a specialist foster carer. She has been working in this field for six years after giving up her position as a behaviour manager for a local school. During this time she has welcomed 14 difficult to place children into her home.

As a specialist foster carer she works with profoundly damaged children, seeing each child through a specific behavioural modification programme, at the end of which they will hopefully be in the position to be returned either back to their family or into mainstream foster care.

Casey combines fostering with writing, usually late at night when the rest of the family is sleeping.

Casey is married with two grown-up children and three grandchildren.

The name Casey Watson is a pseudonym.

GOR004779364
9780007479610
0007479611
Breaking the Silence: Two little boys, lost and unloved. One foster carer determined to make a difference. by Casey Watson
Casey Watson
Used - Very Good
Paperback
HarperCollins Publishers
2013-06-06
304
N/A
Book picture is for illustrative purposes only, actual binding, cover or edition may vary.
This is a used book - there is no escaping the fact it has been read by someone else and it will show signs of wear and previous use. Overall we expect it to be in very good condition, but if you are not entirely satisfied please get in touch with us
Trustpilot