The Boy No One Loved Casey Watson 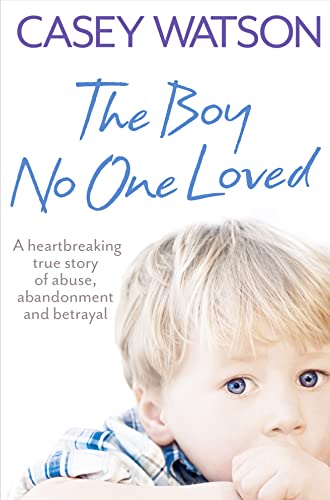 The Boy No One Loved by Casey Watson

Justin was five years old; his brothers two and three. Their mother, a heroin addict, had left them alone again. Later that day, after trying to burn down the family home, Justin was taken into care.

The Boy No One Loved: A Heartbreaking True Story of Abuse, Abandonment and Betrayal by Casey Watson

Justin was five years old; his brothers two and three. Their mother, a heroin addict, had left them alone again. Later that day, after trying to burn down the family home, Justin was taken into care.

Justin was taken into care at the age of five after deliberately burning down his family home. Six years on, after 20 failed placements, Justin arrives at Casey's home. Casey and her husband Mike are specialist foster carers. They practice a new style of foster care that focuses on modifying the behaviour of profoundly damaged children. They are Justin's last hope, and it quickly becomes clear that they are facing a big challenge.

Try as they might to make him welcome, he seems determined to strip his life of all the comforts they bring him, violently lashing out at schoolmates and family and throwing any affection they offer him back in their faces. After a childhood filled with hurt and rejection, Justin simply doesn't want to know. But, as it soon emerges, this is only the tip of a chilling iceberg.

A visit to Justin's mother on Boxing Day reveals that there are some very dark underlying problems that Justin has never spoken about. As the full picture becomes clearer, and the horrific truth of Justin's early life is revealed, Casey and her family finally start to understand the pain he has suffered...

Casey Watson is a specialist foster carer. She has been working in this field for eleven years after giving up her position as a behaviour manager for a local school. During this time she has welcomed 14 difficult to place children into her home.

As a specialist foster carer she works with profoundly damaged children, seeing each child through a specific behavioural modification programme, at the end of which they will hopefully be in the position to be returned either back to their family or into mainstream foster care.

Casey combines fostering with writing, usually late at night when the rest of the family is sleeping. Casey is married with two grown-up children and three grandchildren. The name Casey Watson is a pseudonym.

GOR003228099
9780007436569
0007436564
The Boy No One Loved: A Heartbreaking True Story of Abuse, Abandonment and Betrayal by Casey Watson
Casey Watson
Used - Very Good
Paperback
HarperCollins Publishers
2011-10-13
304
N/A
Book picture is for illustrative purposes only, actual binding, cover or edition may vary.
This is a used book - there is no escaping the fact it has been read by someone else and it will show signs of wear and previous use. Overall we expect it to be in very good condition, but if you are not entirely satisfied please get in touch with us
Trustpilot