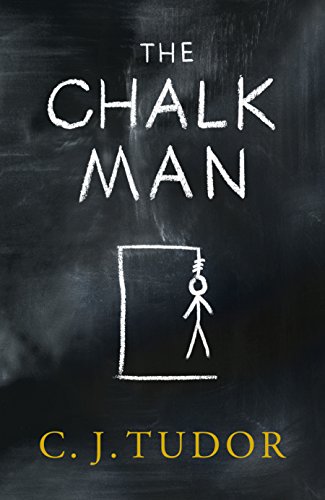 The Chalk Man: The Sunday Times bestseller. The most chilling book you'll read this year by C. J. Tudor

IF YOU ONLY READ ONE BOOK THIS YEAR MAKE IT THIS ONE. SOME GAMES ONLY END IN ONE WAY . . .

'There are shades of Stephen King when the reality bends into the sinister, and a deliciously creepy finale' Daily Mail

'Completely engrossing. Reminiscent of those unsettling Stephen King stories of childhood' John Boyne author of The Boy In The Striped Pyjamas

We all have fears we hide from. But in the end they will find us . . .

None of us ever agreed on the exact beginning.

Was it when we started drawing the chalk figures, or when they started to appear on their own?

Was it the terrible accident?

Or when they found the first body?

'An intriguing puzzle with an engaging cast of characters . . . highly promising debut' Mail on Sunday, Thriller of the Week

'Deliciously creepy with a side order of Eighties nostalgia' Good Housekeeping

'[I] haven't had a sleepless night due to a book for a long time. The Chalk Man changed that. Many congrats C. J. Tudor' Fiona Barton, bestselling author of The Widow

'What a great book. A twisty thriller and downright creepy ending. 5 stars' Sarah Pinborough, the bestselling author of Behind Her Eyes

C. J. Tudor's love of writing, especially the dark and macabre, started young. When her peers were reading Judy Blume, she was devouring Stephen King and James Herbert.

Over the years she has had a variety of jobs, including trainee reporter, radio scriptwriter, dog walker, voiceover artist, television presenter, copywriter and, now, author.

She lives in Sussex with her family.

GOR008857763
9780718187446
071818744X
The Chalk Man: The Sunday Times bestseller. The most chilling book you'll read this year by C. J. Tudor
C. J. Tudor
Used - Very Good
Paperback
Penguin Books Ltd
2018-01-11
352
N/A
Book picture is for illustrative purposes only, actual binding, cover or edition may vary.
This is a used book - there is no escaping the fact it has been read by someone else and it will show signs of wear and previous use. Overall we expect it to be in very good condition, but if you are not entirely satisfied please get in touch with us
Trustpilot