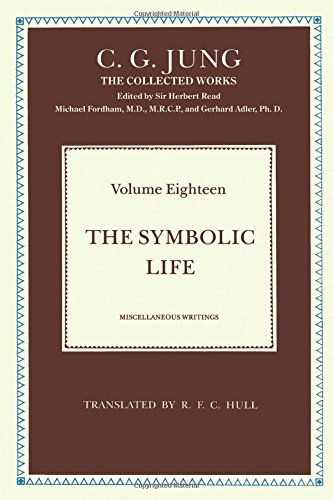 The Symbolic Life by C.G. Jung

Originally planned as a brief final volume in the Collected Works, The Symbolic Life has become the most ample volume in the edition, and one of unusual interest.

Originally planned as a brief final volume in the Collected Works, The Symbolic Life has become the most ample volume in the edition, and one of unusual interest. It contains some 160 items spanning sixty years; they include forewords, replies to questionnaires, encyclopedia articles, occasional addresses, and letters on technical subjects.
Collection of this material relied on three chief circumstances. After Jung returned from active medical practice, he gave more of his time to writing, and some sixty papers as well as books were written after 1950. Second, recent research has brought to light a number of reviews, reports and articles from the early years of Jung's career. Finally, Jung's files yielded several finished or virtually finished papers that survived in manuscript.

Volume 18 includes three longer works: 'The Tavistock Lectures' (1936); 'Symbols and the Interpretation of Dreams' (1961); and 'The Symbolic Life', the transcript of a seminar given in London in 1939.

The Tavistock Lectures. Symbols and the Interpretation of Dreams. The Symbolic Life. On Occultism. The Psychogenesis of Mental Disease. Freud and Psychoanalysis. On Symbolism. Two Essays on Analytical Psychology. The Structure and Dynamics of the Psyche,. The Archetypes and the Collective Unconscious. Civilization in Transition. Psychology and Religion. Alchemical Studies. The Spirit in Man, Art, and Literature. The Practice of Psychotherapy. The Development of Personality. Addenda. Bibliography. Index of Titles. Index.
NGR9780415098953
9780415098953
0415098955
The Symbolic Life: Miscellaneous Writings by C.G. Jung
C.G. Jung
Collected Works of C. G. Jung
New
Hardback
Taylor & Francis Ltd
1977-04-07
934
N/A
Book picture is for illustrative purposes only, actual binding, cover or edition may vary.
This is a new book - be the first to read this copy. With untouched pages and a perfect binding, your brand new copy is ready to be opened for the first time
Trustpilot