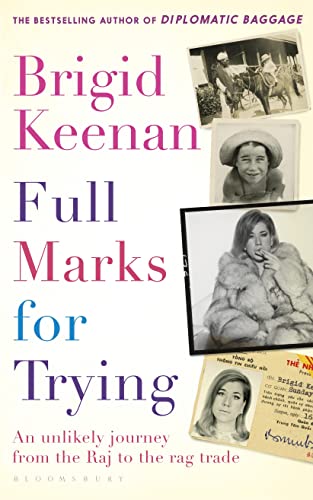 The outrageously witty--and surprisingly touching--new memoir about growing up in India and coming of age in sixties London, by the bestselling author of Diplomatic Baggage.

Full Marks for Trying: An unlikely journey from the Raj to the rag trade by Brigid Keenan

Brigid Keenan was never destined to lead a normal life. From her early beginnings - a colourful childhood in India brought to an abrupt end by independence and partition, then a return to dreary post-war England and on to a finishing school in Paris with daughters of presidents and princes - ordinary didn't seem to be her fate. When, as a ten-year-old, she overheard her mother describe her as `desperately plain', she decided then and there that she had to rely on something different: glamour, eccentricity, character, a career - anything, so as not to end up at the bottom of the pile. And in classic Brigid style, she somehow ended up with them all. Fate often gave Brigid a helping hand - in the late fifties, in her teens, she landed a job as an assistant at the Daily Express in London, and by the tender age of twenty-one she was a Fashion Editor at the Sunday Times. It was the dawn of the swinging sixties, and London was the place to be. Brigid worked with David Bailey and Jean Shrimpton, had her hair cut by Vidal Sassoon, drove around London in a mini-van, covered the Paris Collections and was labelled a `Young Meteor' by the press. Despite always trying her hardest, Brigid's enthusiasm - and occasional naivete - could lead to embarrassing moments, such as when she turned up to report on the Vietnam war in a mini skirt ... Candid, wickedly funny and surprisingly touching, Full Marks for Trying is a coming-of-age memoir that will delight, entertain, and make you cry with laughter.
With flashes of Nancy Mitford wit ... Brigid Keenan is as skittish as a kitten with needle claws, as stricken as a deer in headlights, and as smart as a cage of monkeys * The Times *
Keenan, I suspect, was quite possibly put on this planet with the express purpose of writing -- Katie Hickman * Sunday Times *
A new comic genius - the sort that can make you laugh out loud three or four times a page -- William Dalrymple
So funny and frank and moving -- Deborah Moggach
Former fashion journalist Brigid Keenan is the reincarnation of Norman Wisdom, Inspector Clouseau and Frank Spencer rolled into one -- Roger Lewis * Daily Mail *
Wherever in the world she is writing from, her warmth and her sharp observations won't fail to delight * Financial Times *
Brightly funny ... adorably different, and memory-sharp * Saga *
Brigid Keenan is an author and journalist. She has worked as an editor on Nova magazine, the Observer and the Sunday Times. She has published two fashion histories as well as Travels in Kashmir, Damascus: Hidden Treasures of the Old City, the bestselling Diplomatic Baggage, and, most recently, the companion memoir Packing Up. Brigid Keenan is a founding board member of the Palestine Festival of Literature. She has spent most of her life in far-flung diplomatic postings, but now lives with her husband in Pimlico and Somerset; they have two daughters and four grandchildren.
GOR007488368
9781408852279
1408852276
Full Marks for Trying: An unlikely journey from the Raj to the rag trade by Brigid Keenan
Brigid Keenan
Used - Very Good
Hardback
Bloomsbury Publishing PLC
2016-06-02
208
N/A
Book picture is for illustrative purposes only, actual binding, cover or edition may vary.
This is a used book - there is no escaping the fact it has been read by someone else and it will show signs of wear and previous use. Overall we expect it to be in very good condition, but if you are not entirely satisfied please get in touch with us
Trustpilot