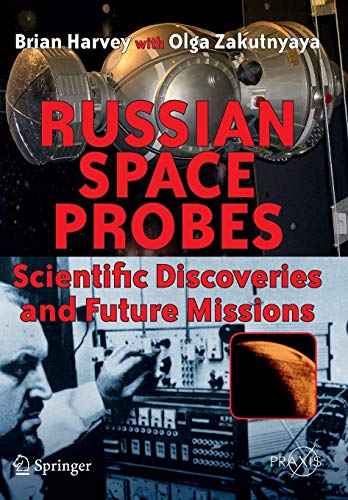 Brian Harvey recounts for the first time the definitive history of scientific Russian space probes and the knowledge they acquired of the Earth, its environment, the Moon, Mars and Venus.

Brian Harvey recounts for the first time the definitive history of scientific Russian space probes and the knowledge they acquired of the Earth, its environment, the Moon, Mars and Venus. He examines what Russian Space Science has actually achieved in furthering our knowledge of the Solar System, focusing on the instrumentation and scientific objectives and outcomes, the information gained and lessons learnt. Boxes and charts are used extensively in order to convey in an easily understandable manner for the non-scientific reader the problems and issues addressed and solved by Soviet space science. The book opens with the story of early space science in Russia, which started when the first Russian rockets were fired into the high atmosphere from Kapustin Yar in the late 1940s. Instruments were carried to measure and map the atmosphere and later rockets carried dogs to test their reactions to weightlessness. In order to beat America into Earth orbit, two simpler satellites than originally planned were launched, Sputnik and Sputnik 2, which provided some initial information on atmospheric density, while the following Sputnik 3 carried twelve instruments to measure radiation belts, solar radiation, the density of the atmosphere and the Earth's magnetic field. The author recounts how, by the 1960s, the Soviet Union had developed a program of investigation of near-Earth space using satellites within the Cosmos program, in particular the DS (Dnepropetrovsky Sputnik), small satellites developed to investigate meteoroids, radiation, the magnetic fields, the upper atmosphere, solar activity, ionosphere, charged particles, cosmic rays and geophysics. Brian Harvey then gives the scientific results from Russian lunar exploration, starting with the discovery of the solar wind by the First Cosmic Ship and the initial mapping of the lunar far side by the Automatic Interplanetary Station. He describes Luna 10, which made the first full study of the lunar environment, Luna 16 which brought soil back to Earth and the two Moon rovers which travelled 50 kms across the lunar surface taking thousands of measurements, soil analyses and photographs, as well as profiles of discrete areas. Chapters 4 and 5 describe in detail the scientific outcomes of the missions to Venus and Mars, before considering the orbiting space stations in Chapter 6. Space science formed an important part of the early manned space program, the prime focus being the human reaction to weightlessness, how long people could stay in orbit and the effects on the body, as well as radiation exposure. Chapter 7 looks at the later stage of Soviet and Russian space science, including Astron and Granat, the two observatories of the 1980s, and Bion, the space biology program which flew monkeys and other animals into orbit. The final chapter looks forward to a new period of Russian space science with the Spektr series of observatories and a range smaller science satellites under the Federal Space Plan 2006-2015.

"This well-researched book begins with a discussion of early Soviet balloon flights, followed by coverage of the Sputnik era and the Soviet lunar, Venus, and Mars probes. Harvey ... and Zakutnyaya, a science journalist, provide good descriptions of numerous Soviet experiments related to space biology and materials science. ... Overall, the book provides an excellent account of the extensive scientific results/accomplishments of Soviet space programs. ... An important contribution to the history of space science. Summing Up: Highly recommended. All readers." (A. M. Strauss, Choice, Vol. 49 (3), November, 2011)

"The country's descent from technological and scientific dominance is clearly demonstrated by this book, which summarizes in considerable depth the scientific missions and discoveries made by the former Soviet Union. ... the entire book is taken up with descriptions of scientific endeavours undertaken during the 1960s and 1970s. ... This well-researched volume provides a valuable account of many experiments and missions which have previously been poorly documented in the West." (Peter Bond, The Observatory, Vol. 132 (1227), April, 2012)

Brian Harvey is an established Praxis author of many books in the Springer-Praxis Space Exploration program on the Russian, Chinese, Indian, Japanese, European space programs. He was the Editor of the Space Exploration 2007 annual and is Joint Editor of the following annual, due in September 2007: Space Exploration 2008. Brian has written many articles for 'Spaceflight' magazine, 'Orbit', 'Astronomy and Space' and the Journal of the British Interplanetary Society and regularly broadcasts on spaceflight for RTE, the BBC and the Canadian Broadcasting Corporation. Dr. Olga Zakutnyaya studied journalism at Novosibirsk State University and Lomonosov Moscow State University. Since 2003 she has been working as a science journalist for various editions, mainly freelance. In 2008 she acquired the Ph.D. in philolohu. She has been working as an assistant to the head of the Public Relations department of the Space Research Institute of the Russian Academy of Sciences (IKI).
Introduction by the authors.- Acknowledgments.- Glossary.- Terminological and translation notes.- Reference notes.- List of tables.- List of illustrations.- List of figures.- Chapter 1: Early space science.- Chapter 2: Deepening our understanding.- Chapter 3: Revealing the Moon.- Chapter 4: Unveiling Venus.- Chapter 5: The path to Mars.- Chapter 6: Orbiting space stations.- Chapter 7: Later Soviet space science: the observatories.- Chapter 8: Perspectives, past, and future.- Annex: Summary of Soviet and Russian space science missions.- Bibliography.- Index.
NLS9781441981493
9781441981493
1441981497
Russian Space Probes: Scientific Discoveries and Future Missions by Brian Harvey
Brian Harvey
Space Exploration
New
Paperback
Springer-Verlag New York Inc.
2011-05-06
514
N/A
Book picture is for illustrative purposes only, actual binding, cover or edition may vary.
This is a new book - be the first to read this copy. With untouched pages and a perfect binding, your brand new copy is ready to be opened for the first time
Trustpilot