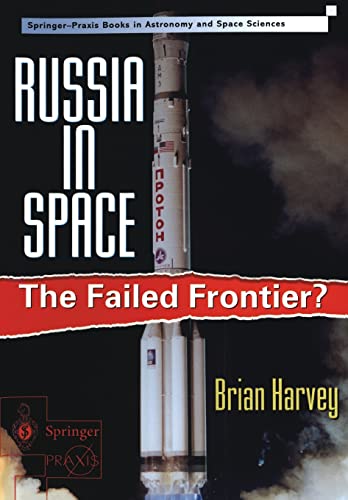 Russia in Space by Brian Harvey

Until the Apollo-Soyuz flight of 1972, the Russian Space Program was shrouded in such complete secrecy that only rumors of failures (or catastrophes) reached the West.

Russia in Space: The failed frontier? by Brian Harvey

Until the Apollo-Soyuz flight of 1972, the Russian Space Program was shrouded in such complete secrecy that only rumors of failures (or catastrophes) reached the West. This comprehensive history of the Russian Space Program, from its Sputnik origins to the privatized Mir Space Station, addresses the technical, political, historical, human, and organizational issues and provides a balanced focus on the manned and unmanned programs. It is the first book to assess the Russian Space Program including the 10-year period since the fall of communism.

From the reviews of the first edition:

The author describes the various satellite programs, the facilities, international cooperation and the space industry in a logical manner, providing at the same time the necessary links with the past. The descriptions are concise and to the point, accompanied by tables where appropriate and a few illustrations. ... This is a 'must have' book - it is highly recommended. (News Bulletin of the Astronautical Society of Western Australia, Vol. 28 (2), 2002)

This is the third of Brian Harvey's books about the Soviet / Russian space programme ... . I found this new work informative and refreshing ... . The book follows the decline of the old Soviet military programme as the USSR disintegrated and describes the more modest Russian projects which followed it. Many different types of military missions are described with photographs, or sketches, of the satellites themselves. ... Personally, I liked this book and enjoyed reading it. (John Davies, The Observatory, Vol. 121 (1164), 2001)

This book covers the period 1992-2000. He reviews the previous achievement of the Soviet Union putting into context the programmes flown under both regimes. It is a good companion volume to the one he wrote earlier on the Soviet Programme. The pictures are really excellent. (Rex Hall, Spaceflight, Vol. 43 (8), 2001)

Space writer Brian Harvey's Russia in Space offers a comprehensive guide to the nuts and bolts of today's Russian space programme, plus an assessment of where the Russians now are in space, how they got there, and where they might go next. ... Harvey has produced a useful and timely guide for evaluating Russia as a partner in Western space activities. (James Oberg, New Scientist, February, 2001)

Beginnings.- Sputnik.- Gagarin.- Race to the Moon.- Space Stations.- The Moon and the Planets.- Behind the Scenes.- Russia's Space Shuttle.- The Enduring achievement of MIR.- 2001 The Space Station.- The Russian Space programme in the 21st Century.
GOR006926735
9781852332037
1852332034
Russia in Space: The failed frontier? by Brian Harvey
Brian Harvey
Astronomy and Planetary Sciences
Used - Very Good
Paperback
Springer London Ltd
20001221
330
N/A
Book picture is for illustrative purposes only, actual binding, cover or edition may vary.
This is a used book - there is no escaping the fact it has been read by someone else and it will show signs of wear and previous use. Overall we expect it to be in very good condition, but if you are not entirely satisfied please get in touch with us
Trustpilot