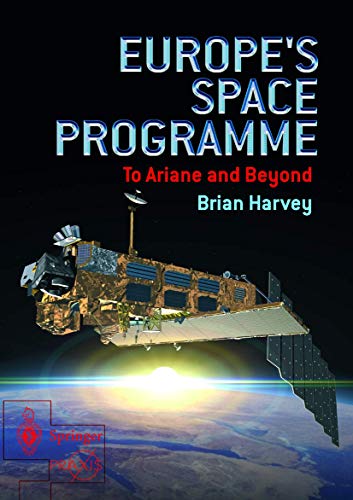 Offers a comprehensive account of the development of Europe's highly successful space programme. This title explains the politics, science and organisation of the European Space Programme and the many technological achievements of its satellites and rockets. It focuses on Europe placing the various national programmes in a European context.

Europe's Space Programme: To Ariane and Beyond by Brian Harvey

A first, comprehensive account of the development of Europe's highly successful space programme.-

Explains the politics, science and organisation of the European Space Programme and the many technological achievements of its satellites and rockets.-

Highlights the major contributions of the European Space Agency's scientific and applications programmes and puts them in a global perspective.-

Focuses on Europe placing the various national programmes in a European context.

"The book is split into seven chapters, covering early rocket development, the European rocket and satellite organizations ... and their resultant merger as ESA, the national programmes, specific spacecraft programmes, manned spaceflight and a look towards the future. ... The book is well illustrated with black and white photos. ... It is ... a well written and accessible account of Europe's achievements in space. ... What the book does well is take the overview that a truly European programme deserves." (International Space Review, September, 2005)

"This is a fine book, a good example of how to write technical text. Its subject matter, the development of the European space programme, although full of interesting characters and Machiavellian plot lines, in less-able hands may well have been handled in a ploddingly dull manner. Harvey brings it to life, not with literary fire but with careful explanations and enough detail to tell the story but not so much that it becomes a moronic fact sheet." (Barry Kent, The Observatory, Vol. 123 (1177), 2003)

"Europe's Space Programme: To Ariane and Beyond is a book well worth having on your reference shelf. It gives a detailed but highly digestible account of the birth of the ESA (European Space Agency) and its activities right up to the end of 2002, and is both useful and entertaining. ... A five-page list of acronyms and abbreviations near the beginning of the book is convenient ... . There are around 120 illustrations, many of them of significant historical interest." (Anna Nolan, Astronomy & Space, July, 2003)

"Europe's Space Programme is a book of great ambition. It attempts to describe Europe's achievements in space over the past 60 years, starting with the successful launch of the first V2 rocket ... . Europe has witnessed such rapid and dramatic political and economic changes since then that Brian Harvey's ambitious venture deserves our admiration ... . the book succeeds in presenting the European space effort as a major success." (Roger-Maurice Bonnet, Physics World, September, 2003)

"This is really a good reference book which fits nicely in the series of other space books that Springer has published in the last few years ... . Brian Harvey's book is recommended to the readers." (Jos Heyman, News Bulletin of the Astronautical Society of Western Australia, Vol. 28 (8), 2003)

Author's Introduction.- The First Real Rocket.- European Co-operaton - ELDO and ESTRO.- The National Programmes.- The European Space Agency.- Scientific & Applications Programmes.- European Manned Spaceflight.- The Future of Europe in Space.- Bibliography.- Websites.- List of European Space Landings.- Notes.
GOR005652722
9781852337223
1852337222
Europe's Space Programme: To Ariane and Beyond by Brian Harvey
Brian Harvey
Springer Praxis Books
Used - Very Good
Paperback
Springer London Ltd
2003-02-14
384
N/A
Book picture is for illustrative purposes only, actual binding, cover or edition may vary.
This is a used book - there is no escaping the fact it has been read by someone else and it will show signs of wear and previous use. Overall we expect it to be in very good condition, but if you are not entirely satisfied please get in touch with us
Trustpilot