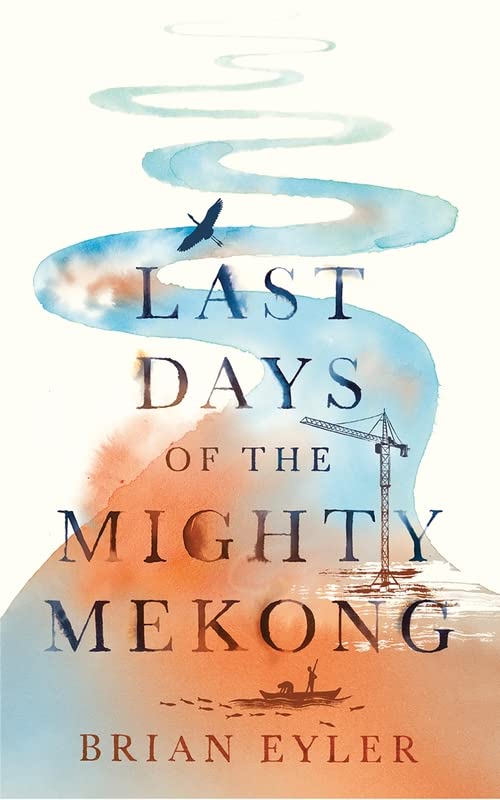 A vivid account of how one of the most remote and naturally beautiful areas in the world is being wholly transformed by rapid industrial and urban development, the scale of which has never been seen before.

Celebrated for its natural beauty and its abundance of wildlife, the Mekong river runs thousands of miles through China, Myanmar, Laos, Thailand, Cambodia, and Vietnam. Its basin is home to more than 70 million people and has for centuries been one of the world's richest agricultural areas and a biodynamic wonder. Today, however, it is undergoing profound changes. Development policies, led by a rising China in particular, aim to interconnect the region and urbanize the inhabitants. And a series of dams will harness the river's energy, while also stymieing its natural cycles and cutting off food supplies for swathes of the population. In Last Days of the Mighty Mekong, Brian Eyler travels from the river's headwaters in China to its delta in southern Vietnam to explore its modern evolution. Along the way he meets the region's diverse peoples, from villagers to community leaders, politicians to policy makers. Through conversations with them he reveals the urgent struggle to save the Mekong and its unique ecosystem.
In this compelling account, Brian Eyler travels down the river, meeting the rebels trying to save it from destruction. * China Dialogue *
The book describes how unsustainable human society's current relationship is with the Mekong * Council of Foreign Affairs *
Brian Eyler ... has penned an engaging and open-ended book, with a less elegiac tone than its title might imply. At many points a vividly reported travelogue. * China Dialogue *
Eyler offers an unbiased, balanced, and nuanced sitrep of the challenges facing the Mekong ... Last Days of the Mighty Mekong is also full of stimulating facts and figures that grab and hold the reader's attention. * Diplomat *
The Last Days is a timely reminder that one of the world's most remote and naturally beautiful areas is being trans formed by industrial and urban development, the scale and pace of which have never been seen before. Eyler makes an erudite appeal for governments to face their past mistakes - including the over-damming of the river - and avert the further wrecking of the Mekong's amazing eco-system. * South China Morning Post *
Eyler has written a breathtaking account of a journey down the river, from high up in the Chinese province of Yunnan to the Mekong Delta more than 2,700 miles away [...] His book reads like a travelogue, filled with vivid descriptions of the places he visits and the people he encounters. But it is also a stark warning that the river is heading for irreparable ruin. * Wall Street Journal *
A wonderfully illuminating and beautifully written portrait of life along the Mekong, and of the forces transforming the region. Eyler offers the type of insight that can only be gained from years of on-the-ground experience. * Elizabeth Economy, Director for Asia Studies, Council on Foreign Relations *
A moving requiem for a complex ecosystem upon which millions depend for their livelihoods. The book is an indictment of the failure to treat the Mekong as a single integrated system or to incorporate the local wisdom of the communities who best understand the river. * Judith Shapiro, author of China's Environmental Challenges *
Readers of this book will respond as I have done to Eyler's richly evocative prose when he writes of the experiences that may be had travelling on and by the river ... I regret not having met Eyler and becoming aware of his writing only recently. I am envious of his sustained personal association with the river over a decade and a half. * Milton Osborne, Mekong Review *
Brian Eyler tells the story of a river veiled in mystique. He sounds a warning about the ominous challenges it now faces: the encroachment of the state, breakneck hydropower development, the threats of climate change, and an increasingly powerful China bent on harnessing the Mekong to power its continued rise. This is the definitive story of the present and possible future of the Mekong, and an elegy for one of Asia's great rivers. * Sebastian Strangio, author of Hun Sen's Cambodia *
The definitive work on Asia's most vital river, this book is more than sound scholarship and wise policy. Brian Eyler shares lyrical and haunting stories, showing how and why the Mighty Mekong must be saved. * Ted Osius, Former US Ambassador to Vietnam (2014-17) *
Brian Eyler is the director of the Stimson Center's Southeast Asia Program in Washington, DC. Previously, he directed study abroad centres in Beijing and Kunming, China for IES Abroad and led numerous study tours throughout the Mekong region.
Introduction 1. Yubeng: The Last Shangri-la 2. Damming the Upper Mekong 3. The Erhai Valley 4. The Akha as Modern Zomians 5. The Golden Triangle in Transition 6. Laos as a Contested Space 7. Damming the Lower Mekong 8. Phnom Penh and Boeung Kak Lake 9. The Tonle Sap 10. Whither the Mekong Delta
NPB9781783607204
9781783607204
1783607203
Last Days of the Mighty Mekong by Brian Eyler
Brian Eyler
Asian Arguments
New
Hardback
Bloomsbury Publishing PLC
2019-02-15
384
N/A
Book picture is for illustrative purposes only, actual binding, cover or edition may vary.
This is a new book - be the first to read this copy. With untouched pages and a perfect binding, your brand new copy is ready to be opened for the first time
Trustpilot