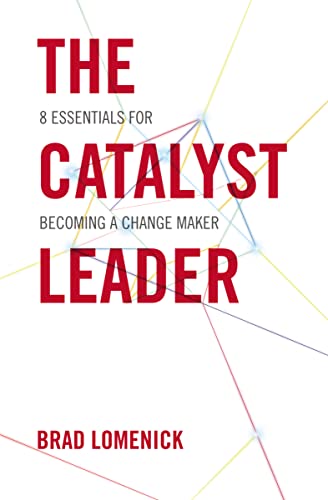 The Catalyst Leader by Brad Lomenick

The Catalyst Leader identifies the 8 essentials and key characteristics of a Catalyst leader for leading well now and over the next 20 years.

The Catalyst Leader: 8 Essentials for Becoming a Change Maker by Brad Lomenick

The Catalyst Leader identifies the 8 essentials and key characteristics of a Catalyst leader for leading well now and over the next 20 years.

Are you a high-octane, energizing leader with big ideas and the skills to back them up? Do you help shape the hearts and minds of those you lead? In short, are you a Catalyst leader? The reality is that most of us want to be good leaders, but we're not sure how to build those elements in a way that will deliver the most impact in our leadership.

The Catalyst Leader lays out the key elements and defines what it means to be a Catalyst and reveals the path for developing these elements in your own leadership skill set. Readers learn:

You may be recognized as a leader, but it doesn't mean you are influencing and truly making a difference. The Catalyst Leader is a valuable new resource designed to help you lead now, and lead well.

Brad Lomenick is a strategic advisor and leadership consultant specializing in influence, innovation, generational issues and business strategy. He is a sought-after speaker at conferences, churches and colleges as well as author of The Catalyst Leader (Thomas Nelson, 2013). For over a decade, he served as lead visionary and president of Catalyst, one of America's largest movements of Christian leaders. Under his watch, Catalyst convened hundreds of thousands of influencers through high-energy and experiential leadership conferences across the United States. Before running Catalyst, he spent five years involved in the growth of the nationally acclaimed [email protected] magazine and was a management consultant with Cornerstone Group. Before that, he served as foreman for Lost Valley Ranch, a four-diamond working guest ranch in the mountains of Colorado. Brad serves on the advisory board for Suffered Enough, the A21 Campaign, Red Eye Inc. and Praxis. Follow him on Twitter, Facebook and Instagram: @bradlomenick, or check out his blog: www.BradLomenick.com.
CIN000581135
9781400276691
1400276691
The Catalyst Leader: 8 Essentials for Becoming a Change Maker by Brad Lomenick
Brad Lomenick
Used - Very Good
Paperback
Thomas Nelson Publishers
2013-03-26
288
N/A
Book picture is for illustrative purposes only, actual binding, cover or edition may vary.
This is a used book - there is no escaping the fact it has been read by someone else and it will show signs of wear and previous use. Overall we expect it to be in very good condition, but if you are not entirely satisfied please get in touch with us
Trustpilot