Inside the Mind of John Wayne Gacy Brad Hunter 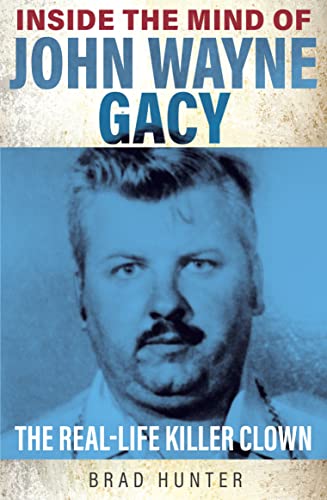 Inside the Mind of John Wayne Gacy by Brad Hunter

Inside the Mind of John Wayne Gacy: The Real-Life Killer Clown by Brad Hunter

New York Post and Toronto Sun crime reporter and author of Cold Blooded Murder, Brad Hunter has spent over thirty years writing about some of America's most horrific crimes. In this new book he enters the mind of John Wayne Gacy, the real-life 'Killer Clown', often said to be the inspiration for Stephen King's evil Pennywise in It.

Gacy lured victims to his home with the promise of work or a warm bed and then duped them into putting on handcuffs, claiming he wanted to show them a magic trick. He would then rape and torture his victims before killing them by suffocating or strangling them. Twenty-six were buried in the crawl space beneath his home; others were buried elsewhere on his property, while a handful were dumped in the Des Plaines River.

While Gacy was executed for his sickening crimes in 1994, his terrifying spectre continues to haunt us. At least five of his victims remain unidentified and detectives have always suspected that the known victims were just the tip of the iceberg. Gacy even told one detective that his tally of murders was closer to forty-five victims.

How many victims were there? Did Gacy act alone? And what drove John Wayne Gacy to murder? Was it his alcoholic, abusive father or was it something deep within him that caused the seemingly normal Gacy to sexually assault, torture and murder at least thirty-three young men and boys? And who was the John Wayne Gacy who regularly performed at children's hospitals and charitable events as Pogo, or Patches, the Clown? The Gacy who was a player in local Democratic Party circles?

Drawing on his many years' experience as a crime reporter, investigating and interviewing perpetrators of terrible crimes, Hunter seeks to understand what drove Gacy to unleash a reign of terror in suburban Chicago.

Brad Hunter is the national crime columnist for the Toronto Sun, prior to which he worked for he New York Post. Over a thirty-year career, his work has been published in newspapers and magazines all over the world. He has covered mafia hits, domestic murders and murderers who 'kill for kicks'. He has come face to face with killers such as mafia assassin Sammy 'The Bull' Gravano and Christa Pike, a teenager who tortured and murdered a love rival. He lives in Hamilton, Ontario, Canada and likes pubs, hockey, baseball and spending time with his family.

GOR012574559
9781802470765
180247076X
Inside the Mind of John Wayne Gacy: The Real-Life Killer Clown by Brad Hunter
Brad Hunter
Inside the Mind of
Used - Very Good
Paperback
Ad Lib Publishers Ltd
20220804
224
N/A
Book picture is for illustrative purposes only, actual binding, cover or edition may vary.
This is a used book - there is no escaping the fact it has been read by someone else and it will show signs of wear and previous use. Overall we expect it to be in very good condition, but if you are not entirely satisfied please get in touch with us
Trustpilot