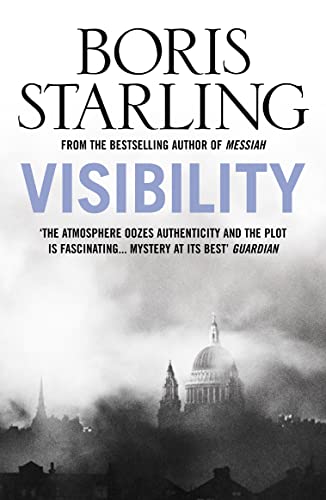 In 1950s London, an MI-5 outcast stumbles upon a secret that will change the world - if he can stay alive long enough to tell it. A page-turner for fans of `Enigma' from the bestselling author of `Messiah'.

In 1950s London, an MI-5 outcast stumbles upon a secret that will change the world - if he can stay alive long enough to tell it. A page-turner for fans of `Enigma' from the bestselling author of `Messiah'.

A stranger's approach offering highly sensitive information seemed routine to an ex-spy turned policeman. But when a body turns up instead of state secrets, Detective Inspector Herbert Smith finds himself in a race against time to solve the murder.

For he is not the only one after the dead man's secret. It seems the CIA, KGB and MI-5 are all vying to get to the truth first and some are prepared to kill for it.

As the Great Smog descends on London, bringing chaos and death, Herbert finds himself facing one of the greatest evils of the twentieth century. At stake is the biggest prize of all: the key to life itself.

'Breathless... with numerous twists and a gloriously far-fetched climax... the atmospheric portrait of London leaves the greatest impression.' Evening Standard

'Engrossing... Starling is a name to watch... an intelligent and thought-provoking book.' New Statesman

`You'll be pinned helplessly to every chilling page.' Company

`A pulsating and imaginative tale of murder and mafia.' Daily Mirror

Boris Starling has worked as a reporter on the Sun and the Daily Telegraph and most recently for a company which specialises in kidnap negotiation, clandestine investigations and political risk analysis. He was one of the youngest-ever contestants on Mastermind in 1996 and went to the semi-finals with his subject: the novels of Dick Francis. Boris studied at Cambridge and currently lives in London.

GOR000384342
9780007119486
0007119488
Visibility by Boris Starling
Boris Starling
Used - Very Good
Paperback
HarperCollins Publishers
2007-07-13
496
N/A
Book picture is for illustrative purposes only, actual binding, cover or edition may vary.
This is a used book - there is no escaping the fact it has been read by someone else and it will show signs of wear and previous use. Overall we expect it to be in very good condition, but if you are not entirely satisfied please get in touch with us
Trustpilot