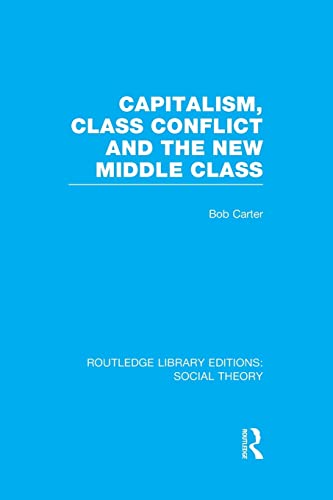 Non-manual workers are fast becoming the largest occupational category in Western capitalist countries. This is the first book to present a detailed socialist analysis of this much discussed change in the class structure of contemporary capitalism.

Focusing on the class position of managerial and supervisory workers, Robert Carter takes as his starting-point the inadequacy of both orthodox Marxist and Weberian models of class relations. Rather, he concurs with recent structuralist theorists of class who maintain that there exists between capital and labour in the process of producing a new middle class. He parts company from the work of these theorists, however, in his insistence that the organisation and consciousness of the new middle class have also to be examined because of the practical consequences these have on class relations.

The book therefore examines the historical rise of the middle class, both in the private and the state sector, together with the tendency of the class to respond to its changing relations with capital and labour by unionising. It is sharply critical of the dominant models of the causes and nature of white-collar unionism - both industrial relations and Weberian ones - and indeed rejects these models in favour of a perspective which views the extent and nature of middle-class unionism within the dynamics of class relations.

NLS9781138965348
9781138965348
1138965340
Capitalism, Class Conflict and the New Middle Class by Bob Carter (University of Leicester, UK)
Bob Carter (University of Leicester, UK)
Routledge Library Editions: Social Theory
New
Paperback
Taylor & Francis Ltd
2015-12-09
268
N/A
Book picture is for illustrative purposes only, actual binding, cover or edition may vary.
This is a new book - be the first to read this copy. With untouched pages and a perfect binding, your brand new copy is ready to be opened for the first time
Trustpilot