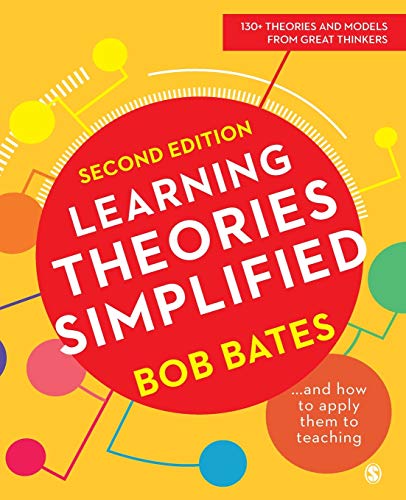 Learning Theories Simplified: ...and how to apply them to teaching by Bob Bates

Are you struggling to get your head around John Dewey's educational pragmatism? What exactly is Jean Piaget saying about cognitive development? Maybe you're running out of time and patience making sense of Carol Dweck's mindsets? Have you reached breaking point reading Daniel T. Willingham on educational neuroscience?

Written for busy teachers, trainers, managers and students, this 'dip-in, dip-out' guide makes theories of learning accessible and practical. It explores 130 classic and contemporary learning theorists in an easy-to-use, bite-sized format with clear relevant illustrations on how each theory will benefit teaching and learning.

Each model or theory is explained in less than 350 words, followed by a 'how to use it' section.

What's new to this edition:

Bob's extensive knowledge of putting educational theory into practice shines through in this book. He gives clear explanations of each theory, often relating them to his own teaching experiences. He uses realistic examples to help the reader engage with the theory, with useful tips to put each into practice. I recommend this book to practitioners in the further education sector as well as in schools.


-- Ann Gravells
Bob Bates was a Senior Executive in the Civil Service for twenty years. During this time, he also worked as a staff trainer and coach and mentor to people with disabilities. He then set up his own Management & Training Consultancy (The Arundel Group), which celebrates its 25th anniversary next year. His work as a management consultant covered a number of local and central government projects as well as working as a trainer with major UK private sector companies. In the late 1990s Bob started a lecturing career, during which time he gained two Masters Degrees in Management and Education and a PhD in Education. He has taught over 1000 teachers and trainers on graduate and post-graduate programmes at two universities. He currently manages and teaches on City & Guild Teaching Award, Certificate and Diploma courses in a Community College The first edition of Learning Theories Simplified was Bob's third book. His first book, The Little Book of BIG Management Theories, written with Jim McGrath, was on W.H, Smiths' non-fiction best sellers list for nearly a year, is being translated into fifteen languages, including Japanese and Arabic, and was chosen by the Chartered Management Institute as the CMI's Practical Management Book of the Year for 2014. His second book, The Little Book of BIG Coaching Theories, published in February 2015, was also a best seller and has been translated into German and Thai. His fourth book, A Quick Guide to Special Needs and Disabilities, was published by SAGE in 2016 and his fifth book, Leadership Theories Simplified, was published by SAGE in 2017. Bob shares his time these days between writing, working voluntarily for a charity that promotes health and education in the Gambia, researching into offender learning and homelessness and teaching Adult Education Teachers. Bob can be contacted through his web site bobbates.co.uk (here you get an option to pick Research or Bad Bob Bates - please choose the former) or email [email protected]
Part 1: Classical Learning Theories Section 1.1: Educational Philosophy Section 1.2: Behaviourism Section 1.3: Cognitivism Section 1.4: Humanism Section 1.5: Neurolism Part 2: Contemporary Thinking on Teaching and Learning Section 2.1: Professionalism Section 2.2: Learning Styles Section 2.3: Motivation Section 2.4: Behaviour Management Section 2.5: Coaching and Mentoring Section 2.6: Teamworking Part 3: An Introduction to Early Childhood and Developmental Strategies Section 3.1: Children and Society Section 3.2: Emotional Growth Section 3.3: Classroom Strategies Section 3.4: Working with Children with Additional Needs Section 3.5: Different School Approaches Part 4: Planning, Delivering and Assessing Learning Section 4.1: Curriculum Planning Section 4.2: Lesson Planning Section 4.3: Delivering Learning Section 4.4: Assessment and Feedback Section 4.5: Evaluating Teaching and Learning
GOR010077137
9781526459381
1526459388
Learning Theories Simplified: ...and how to apply them to teaching by Bob Bates
Bob Bates
Used - Very Good
Paperback
SAGE Publications Ltd
2019-01-31
384
N/A
Book picture is for illustrative purposes only, actual binding, cover or edition may vary.
This is a used book - there is no escaping the fact it has been read by someone else and it will show signs of wear and previous use. Overall we expect it to be in very good condition, but if you are not entirely satisfied please get in touch with us
Trustpilot