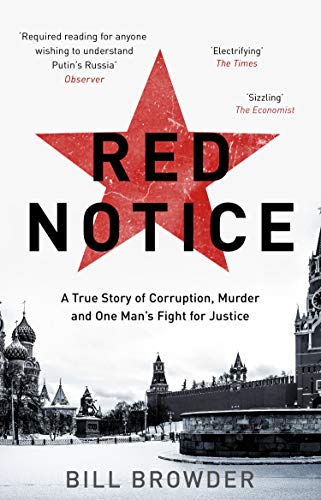 Magnitsky's brutal killing has remained uninvestigated and unpunished to this day. His farcical posthumous show-trial brought Putin's regime to a new low in the eyes of the international community.

Red Notice: How I Became Putin's No. 1 Enemy by Bill Browder

I have to assume that there is a very real chance that Putin or members of his regime will have me killed some day. If I'm killed, you will know who did it. When my enemies read this book, they will know that you know.

Reads like a classic thriller, with an everyman hero alone and in danger in a hostile foreign city ... but it's all true, and it's a story that needs to be told.
LEE CHILD

An unburdening, a witness statement and a thriller all at the same time ... electrifying.
THE TIMES

In November 2009, the young lawyer Sergei Magnitsky was beaten to death by eight police officers in a freezing cell in a Moscow prison. His crime? Testifying against Russian officials who were involved in a conspiracy to steal $230 million of taxes.

Red Notice is a searing expose of the whitewash of this imprisonment and murder. The killing hasn't been investigated. It hasn't been punished. Bill Browder is still campaigning for justice for his late lawyer and friend. This is his explosive journey from the heady world of finance in New York and London in the 1990s, through battles with ruthless oligarchs in turbulent post-Soviet Union Moscow, to the shadowy heart of the Kremlin.

With fraud, bribery, corruption and torture exposed at every turn, Red Notice is a shocking political roller-coaster.

"Reads like a classic thriller, with an everyman hero alone and in danger in a hostile foreign city ... but it's all true, and it's a story that needs to be told." Lee Child "The story of Sergei Magnitsky's life and death is a shocking true-life thriller, and Bill Browder was the man to write it." Tom Stoppard "A sizzling account of Mr Browder's rise, fall and metamorphosis from bombastic financier to renowned human-rights activist ... Reads more like a financial thriller than a real-life story." The Economist "An unburdening, a witness statement and a thriller all at the same time ... Electrifying ... One heck of a read." -- Giles Whittell The Times "An expose of years of state-sponsored torture and murder ... this story of courage combined with a dash of obsessiveness is about the real here and now." -- Sonia Purnell The Independent
Bill Browder, founder and CEO of Hermitage Capital Management, was the largest foreign investor in Russia until 2005, when he was denied entry to the country after exposing widespread corruption. Since 2009, when his lawyer Sergei Magnitsky was murdered in Russian police custody, he has been leading a campaign to impose visa bans and asset freezes on human rights abusers and highly corrupt officials. The United States was the first to impose these sanctions with the passage of the Sergei Magnitsky Rule of Law Accountability Act in 2012. This was followed by the US Global Magnitsky Act in 2016. Since then, Canada, the United Kingdom, Estonia, Latvia and Lithuania have all passed their own versions of the Magnitsky Act. Browder is currently working to have similar legislation passed across the European Union and other countries around the world.
GOR008299600
9780552170321
0552170321
Red Notice: How I Became Putin's No. 1 Enemy by Bill Browder
Bill Browder
Used - Well Read
Paperback
Transworld Publishers Ltd
2015-12-01
480
N/A
Book picture is for illustrative purposes only, actual binding, cover or edition may vary.
This is a used book. We do our best to provide good quality books for you to read, but there is no escaping the fact that it has been owned and read by someone else previously. Therefore it will show signs of wear and may be an ex library book
Trustpilot