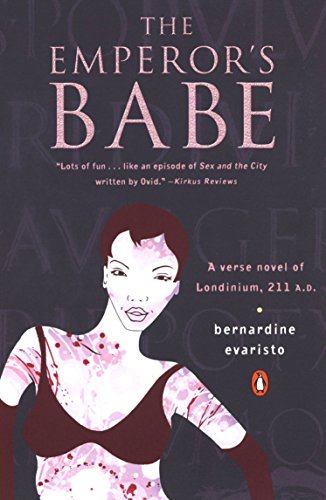 The Emperor's Babe by Bernardine Evaristo

The Emperor's Babe by Bernardine Evaristo

Lots of fun . . . like an episode of Sex and the City written by Ovid.-Kirkus Reviews

Bernardine Evaristo's tale of forbidden love in bustling third-century London is an intoxicating cocktail of poetry, history, and fiction. Feisty, precocious Zuleika, a restless teenage bride of a rich Roman businessman, craves passion and excitement. She wanders through his villa, bored, or sneaks out to see her old friends, seeking an outlet for her creativity. Then she begins an affair with the emperor, Septimus Severus, remembered to history as the African Emperor, and she knows her life will never be the same. Streetwise, seductive, and lyrical, The Emperor's Babe is a glittering fiction with a heroine of ancient times for the modern age (The Times).

The adventures of a sassy, sexy girl about town . . . Funny, engaging, and a daring evocation of the possible genesis of black British history.-The Independent on Sunday

Zuleika leads us on a riotous, racy whirl through Roman Londinium-while displaying her lyric gift throughout, and at last her heartbreak to the core, and her own embrace of doom. . . . a captivating tale in verse.-Robert Fagles
Bernardine Evaristo was born in London to a Nigerian father and an English mother. Her first novel, Lara, won the EMMA (Ethnic Multicultural Media Awards) Best Book Award in 1999. A former Poet in Residence at the Museum of London, she won an Arts Council of Britain Writers' Award in 2000.
CIN001109402
9780142001714
0142001716
The Emperor's Babe by Bernardine Evaristo
Bernardine Evaristo
Used - Very Good
Paperback
Penguin Putnam Inc
20040224
272
N/A
Book picture is for illustrative purposes only, actual binding, cover or edition may vary.
This is a used book - there is no escaping the fact it has been read by someone else and it will show signs of wear and previous use. Overall we expect it to be in very good condition, but if you are not entirely satisfied please get in touch with us
Trustpilot