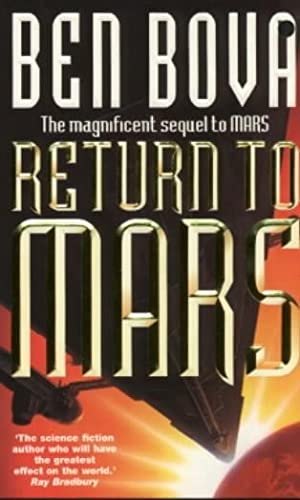 Return to Mars by Ben Bova

An epic space novel by the acclaimed science-fiction writer, this is the story his readers have been waiting for...

Return to Mars by Ben Bova

Published in 1992, MARS was the story of the thrilling first manned journey to the mysterious planet which has fascinated astronomers since the dawn of time. Arthur C. Clarke called it 'a splendid book'; it was a bestseller throughout the world.

Now, in RETURN TO MARS, a carefully picked international crew of astronauts, engineers and scientists is on its way back. Leading them is Jamie Waterman, the man who defied the accepted wisdom of the scientific community - and the direct orders of his superiors - to discover life on the planet.

But there are those who still resent his success; others who have their own reasons to ensure that Waterman, with his almost mystic idealism, does not make the final decisions about Second Mars Expedition. And among the crew is someone whose mental instability could lead to catastrophe for them all.