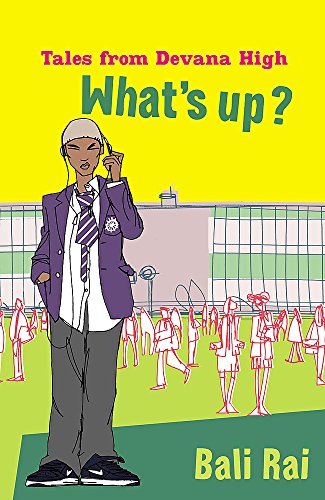 What's Up? by Bali Rai

Hannah, Suky, Grace, Dean, Jit and Imtiaz - they're the best of mates at school, but each of their home lives couldn't be more different....

What's Up? by Bali Rai

Jit's in trouble at school. He's always late - and often skips altogether. The teachers are on to him, and so are his mates. What's he playing at? But Jit's got serious problems at home. He's dealing with his mum, who hasn't had the energy to cook or wash for him since she got back with Micky, her boyfriend, who Jit can't stand. Micky leaches off his mum, and bullies Jit when she's not looking. Jit is constantly tired and angry, and his clothes are beginning to smell. But if he tells his friends, he's going to look like a sadcase, right? Wrong. As soon as Grace and Dean get wind of what's going on, they make it clear that he's not going through this alone. But first he needs to come clean with the school - before he gets excluded. Then the gang are going to deal with mad Micky, once and for all....

Bali Rai was born in 1971 and grew up in Leicester. His debut novel, (UN)ARRANGED MARRIAGE published in 2001 with fantastic reviews and has since been shortlisted for eight regional book prizes, winning The Angus, Stockport and Leicester Book awards. It has also been translated into eight languages to date.

As a child, Bali wanted to be a footballer or to write stories, but he realised he wasn't good enough to play for Liverpool F.C. and after gaining a politics degree in London he returned to his home city and combined a variety of jobs in pubs and clubs with completing his first novel

Now a full time writer, Bali's second novel for young adults, THE CREW won the 2004 Leicester Book Award and his third, RANI AND SUKH is a story of star-crossed teenage lovers. In March 2005 his fourth young adult novel, DOMINOES - a collection of interlinking stories - was published by Hodder Children's Books.

GOR004271611
9780340877302
0340877308
What's Up? by Bali Rai
Bali Rai
Tales From Devana High
Used - Very Good
Paperback
Hachette Children's Group
2005-06-16
160
N/A
Book picture is for illustrative purposes only, actual binding, cover or edition may vary.
This is a used book - there is no escaping the fact it has been read by someone else and it will show signs of wear and previous use. Overall we expect it to be in very good condition, but if you are not entirely satisfied please get in touch with us
Trustpilot