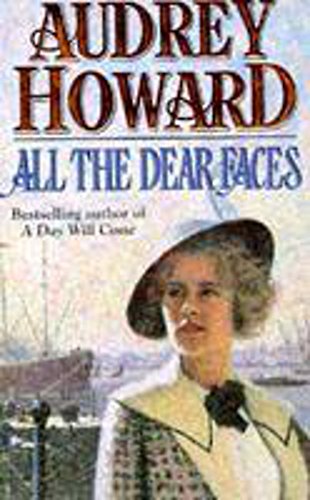 All the Dear Faces by Audrey Howard

Life before and during World War I as seen from the point of view of large Irish family in Liverpool and an aristocratic family in a stately home, the members of which become inextricably involved with the Irish family. This story is taken up a generationl later in There Is No Parting.

All the Dear Faces by Audrey Howard

Edwardian Liverpool - the greatest port in the Empire, a sprawling, brawling city of poverty and wealth, slum tenements and civic pride, vice and hard-won respectability.
Mara O'Shaughnessy, eighth of thirteen children, longs to escape from the crowded tumult of her family. Her sister Caitlin, quiet but determined, is already, to her mother's horror, involved with the suffragettes.
Woodall Park, two-thousand-acre home of Elizabeth Woodall and her parents, could be a million miles away. With their neighbours, the Osbornes of Beechwood Hall, they live their lives of servanted ease, country pursuits and suitable marriages.
Yet, in the golden years before World War I, Liverpool Irish and English gentry are to become fatefully, passionately entangled.

Her thousands of fans recognise the artistry of a true storyteller * Lancashire Life *
Poignant and well plotted, this is the book to curl up with to shut out troubles * Women's Realm on BEYOND THE SHINING WATER *
This saga is, like all of Audrey Howard's books, compelling and memorable . . . a joy to read. * The Historical Novels Review on A PLACE CALLED HOPE *
A compelling and well-paced tale * Coventry Evening Telegraph on A FLOWER IN SEASON *
A fast-moving glorious story . . . The story twists and turns. As ever, Audrey Howard treats us to lovely details . . . It is so sad, sweet and lively too . . . Another true gem. * North Wales Chronicle on WHISPERS ON THE WATER *
Howard's timeless story of love and betrayal is sure to enchant her army of loyal readers * Lancashire Evening Post on PAINTED HIGHWAY *
Audrey Howard was born in Liverpool in 1929. Before she began to write she had a variety of jobs, among them hairdresser, model, shop assistant, cleaner and civil servant. In 1981, while living in Australia, she wrote the first of her bestselling novels. Here fourth novel, The Juniper Bush, won the Romantic Novel of the Year Award in 1988.She lives in St Anne's on Sea, her childhood home.
GOR001385554
9780340586273
0340586273
All the Dear Faces by Audrey Howard
Audrey Howard
Used - Very Good
Paperback
Hodder & Stoughton General Division
1993-08-19
602
N/A
Book picture is for illustrative purposes only, actual binding, cover or edition may vary.
This is a used book - there is no escaping the fact it has been read by someone else and it will show signs of wear and previous use. Overall we expect it to be in very good condition, but if you are not entirely satisfied please get in touch with us
Trustpilot