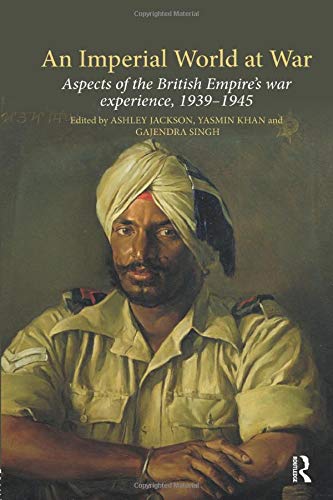 An Imperial World at War by Ashley Jackson

An Imperial World at War: The British Empire, 1939-45 by Ashley Jackson

At the start of the Second World War, Britain was at the height of its imperial power, and it is no surprise that it drew upon the global resources of the Empire once war had been declared. Whilst this international aspect of Britain's war effort has been well-studied in relation to the military contribution of individual dominions and colonies, relatively little has been written about the Empire as a whole. As such, An Imperial World at War makes an important contribution to the historiography relating to the British Empire and its wartime experience. It argues that the war needs to be viewed in imperial terms, that the role of forces drawn from the Empire is poorly understood and that the war's impact on colonial societies is barely grasped at all in conventional accounts. Through a series of case studies, the volume demonstrates the fundamental role played by the Empire in Britain's war effort and highlights some of the consequences for both Britain and its imperial territories.Themes include the recruitment and utilization of military formations drawn from imperial territories, the experience of British forces stationed overseas, the use of strategic bases located in the colonies, British policy in the Middle East and the challenge posed by growing American power, the occupation of enemy colonies and the enemy occupation of British colonies, colonial civil defence measures, financial support for the war effort supplied by the Empire, and the commemoration of the war. The Afterword anticipates a new, decentred history of the war that properly acknowledges the role and importance of people and places throughout the colonial and semi-colonial world.'

This volume emanates from a conference organized as part of the 'Home Fronts of the Empire - Commonwealth' project. The project was generously funded by the Arts and Humanities Research Council and led by Yasmin Khan and Ashley Jackson with Gajendra Singh as Postdoctoral Research Assistant.

Ashley Jackson is Professor of Imperial and Military History at King's College London and a Visiting Fellow of Kellogg College Oxford. He specializes in the history of the British Empire, particularly during times of war. Yasmin Khan is an Associate Professor of History at the University of Oxford, based in the Department for Continuing Education. Her work focuses on British India, decolonisation and refugees. She has most recently published The Raj at War: A People's History of India's Second World War (Bodley Head, 2015). Gajendra Singh is Lecturer in Modern South Asian History at the University of Exeter and author of The Testimonies of Indian Soldiers in Two World Wars: Between Self and Sepoy (Bloomsbury, 2014).

GOR012138391
9780815366867
0815366868
An Imperial World at War: The British Empire, 1939-45 by Ashley Jackson
Ashley Jackson
Used - Like New
Paperback
Taylor & Francis Inc
20171013
386
N/A
Book picture is for illustrative purposes only, actual binding, cover or edition may vary.
The book has been read, but looks new. The book cover has no visible wear, and the dust jacket is included if applicable. No missing or damaged pages, no tears, possible very minimal creasing, no underlining or highlighting of text, and no writing in the margins
Trustpilot