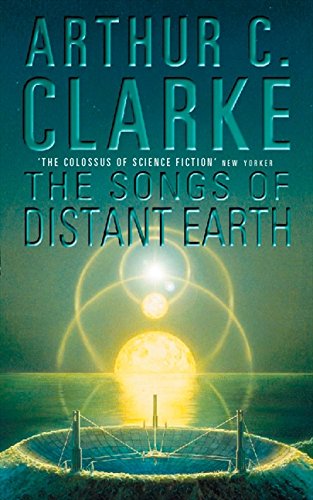 The Songs of Distant Earth by Arthur C. Clarke

From the world's most famous science fiction writer, a poignant and vivid story of doomsday and beyond.

The Songs of Distant Earth by Arthur C. Clarke

From the world's most famous science fiction writer, a poignant and vivid story of doomsday and beyond.

The countdown to doomsday began with the discovery in 1956 of the neutrino, a particle with no mass and no charge. By the year 2001, the significance of this phantom particle was understood: it was a harbinger. A cosmic event was imminent, and would be close enough to touch. Soon the Sun would go nova; the demolition of Earth was assured. And so it happened in the year 3620.

Over the centuries of knowing the end was at hand, humanity pulled together to launch probes into space. Primitive ships, at first, carrying embryos to distant systems, relying on machines to incubate and rear the first people of a virgin land beneath an alien sun. On Thalassa, after a journey of 200 years, a colony blossomed, only to fall silent again.

On Earth the Lords of the Last Days lived with no need to care for the future of the world; it was the wildest of times, and the saddest. Last to leave was the Magellan carrying a million homeless; when cataclysm struck, its voyagers witnessed through telescopes the death of Earth and all its wonders, saw the Atlantic boil dry, the pyramids disintegrate, the land of Antarctica briefly bare of ice before fire consumed everything. Then the million slept.

Five hundred years later, the Magellan must make planetfall to repair its quantum drive. Its sleepers awake to find themselves visitors to Thalassa, where a cvilization has, in fact, survived. A clash of cultures unlike any before brings danger, despair, and some very tough decisions for two different peoples far from Earth - and its distant songs.

'Clarke's simple, musical style never falters in this novel, which is a sobering yet far from bleak commentary on humanity's longing for the stars. Highly recommended'
Library Journal

Born in Somerset in 1917, Arthur C. Clarke has written over fifty books, among which are the science fiction classics 2001, A Space Odyssey, Childhood's End, The City and the Stars and Rendezvous With Rama. He has won all the most prestigious science fiction trophies, and shared an Oscar nomination with Stanley Kubrick for the screenplay of the film of 2001. He lives in Sri Lanka.

GOR000943035
9780586066232
0586066233
The Songs of Distant Earth by Arthur C. Clarke
Arthur C. Clarke
Used - Very Good
Paperback
HarperCollins Publishers
1998-11-02
240
N/A
Book picture is for illustrative purposes only, actual binding, cover or edition may vary.
This is a used book - there is no escaping the fact it has been read by someone else and it will show signs of wear and previous use. Overall we expect it to be in very good condition, but if you are not entirely satisfied please get in touch with us
Trustpilot