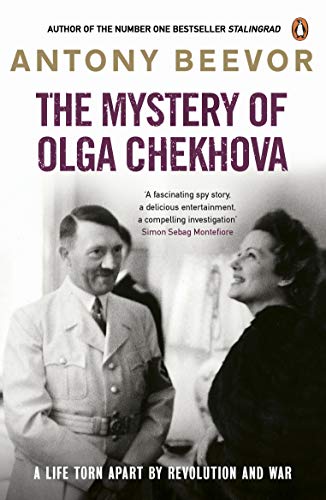 The Mystery of Olga Chekhova by Antony Beevor

Olga Chekhova was a stunning Russian beauty and a famous Nazi-era film actress who Hitler counted among his friends; she was also the niece of Anton Chekhov. After fleeing Bolshevik Moscow for Berlin in 1920, she was recruited by her composer brother Lev, to work for Soviet intelligence. In return, her family were allowed to join her.

The Mystery of Olga Chekhova: A Life Torn Apart By Revolution And War by Antony Beevor

'An extraordinary drama of exile and espionage' Boyd Tonkin, Independent

Olga Chekhova was the niece of playwright Anton Chekhov and a Russian beauty. She was also a famous Nazi-era film actress, closely associated with Adolf Hitler.

After fleeing Bolshevik Moscow for Berlin in 1920, she was recruited by her composer brother Lev to work for Soviet intelligence; in return, her family were allowed to join her. By 1945, several of them were trapped in Berlin as the Red Army approached; meanwhile, as Olga had appeared in photographs with Hitler and his entourage, the rest of her family in Moscow were waiting to be arrested by the NKVD secret police.

The dramatic tale of how one family survived through the Russian Revolution, the Civil War, the rise of Hitler and Stalin, and the Nazi invasion of the Soviet Union is, in Antony Beevor's hands, a breathtaking tale of glamour and survival.

Compelling . . . as engaging a read as Stalingrad and Berlin * Guardian *
Fascinating. An intricate, gracefully told and often moving social history of a talented family in times of revolution, civil war, dictatorship and world conflict -- Rachel Polonsky * New Statesman *
A fascinating spy story, a delicious entertainment, a compelling investigation -- Simon Sebag-Montefiore * Evening Standard *
An extraordinary drama of exile and espionage -- Boyd Tonkin * Independent *
Beevor uses the story to evoke a world - the vague ideological borderlands of Nazism and Communism -- Felipe Fernandez-Armesto * The Times *
Antony Beevor, one of the finest narrative military historians now writing, is a master of revealing vignettes -- Eliot A. Cohen * New York Times *
A true story that is dramatic, evocative, and well worth unearthing * Observer *
Antony Beevor is the author of Crete: The Battle and the Resistance (Runciman Prize), Stalingrad (Samuel Johnson Prize, Wolfson Prize for History and Hawthornden Prize), Berlin: The Downfall, The Battle for Spain (Premio La Vanguardia), D-Day: The Battle for Normandy (Prix Henry Malherbe and the RUSI Westminster Medal), The Second World War, Ardennes 1944 (Prix Medicis shortlist) and Arnhem. The number one bestselling historian in Britain, Beevor's books have appeared in thirty-three languages and have sold over eight million copies. A former chairman of the Society of Authors, he has received a number of honorary doctorates. He is also a visiting professor at the University of Kent and an Honorary Fellow of King's College, London. He was knighted in 2017.
GOR001137628
9780141017648
0141017643
The Mystery of Olga Chekhova: A Life Torn Apart By Revolution And War by Antony Beevor
Antony Beevor
Used - Very Good
Paperback
Penguin Books Ltd
20050505
352
N/A
Book picture is for illustrative purposes only, actual binding, cover or edition may vary.
This is a used book - there is no escaping the fact it has been read by someone else and it will show signs of wear and previous use. Overall we expect it to be in very good condition, but if you are not entirely satisfied please get in touch with us
Trustpilot