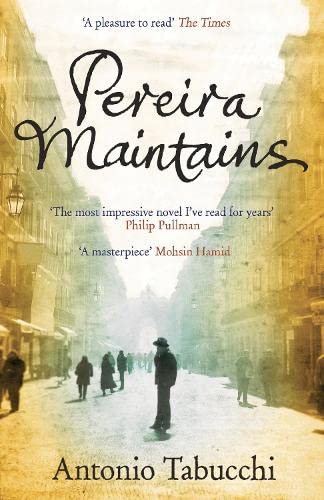 An extraordinary novel from one of Italy's most acclaimed contemporary writers

THE INTERNATIONAL BESTSELLER INTRODUCED BY MOHSIN HAMID 'The most impressive novel I've read for years' PHILIP PULLMAN 'Stunning' DIANA ATHILL In the sweltering summer of 1938 in Portugal, a country under the fascist shadow of Spain, a mysterious young man arrives at the doorstep of Dr Pereira. So begins an unlikely alliance that will result in a devastating act of rebellion. This is Pereira's testimony.
A masterpiece of compression. A political history of 1930s Portugal, a love story between a man and his dead wife, a gloriously successful formal experiment, and an irresistible thriller - and it can be read with enormous pleasure in a single afternoon. -- Mohsin Hamid
Pereira Maintains is small only in size. Its themes are great ones - courage, betrayal, fidelity, love, corruption; and its treatment of them is subtle, skilful, and clear. It's so clear, in fact, that you can see a very long way down, into the heart of a flawed but valiant human being, into the sickness of a nation, into the depths of political evil. It's the most impressive novel I've read for years, and one of the very few that feels truly necessary. -- Philip Pullman
Close to being a perfect novel - brief, tragic, inspiring -- John Carey, Chairman of the International Man Booker 2002
Pereira is a marvelously complex creation. One of the most intriguing and appealing character studies in recent European fiction. * * Kirkus Reviews * *
Every word of Mohsin Hamid's introduction is true: it's a stunningly good novel, and it goes on getting better in one's head after one has stopped reading it - it works as an experience - something that has happened to one, which is of course, the proof of great writing. -- Diana Athill
It grips from start to finish....a riveting political allegory * * Financial Times * *
Tabucchi writes...with an agility of mind and an economy of narrative that pulls the reader along * * Observer * *
Political but gorgeously artful, sad and then laugh out loud funny, pacy as a thriller ....This book is perfectly executed * * Dazed and Confused * *
This novel...has been sensitively and intelligently translated revealing this understated masterpiece of love and courage. * * Good Book Guide * *
[A] succinct, deceptively low-key political thriller...it's brilliant and you'll go on thinking about the characters and the way it's written for weeks. -- Sue Arnold * * Guardian * *
Concise, intense and striking. * * Daily Telegraph * *
Seemingly plain at first, the story becomes gripping as soon as you realize that the beauty of Tabucchi's narrative lies in between the lines, making the novel a thought-provoking and delightful read. -- Maria-Christina Marchi * * Time Out * *
A powerfully concise story of heroism versus acquiescence which gains eloquence from its simplicity * * Sunday Telegraph * *
Tabucchi's book (widely interpreted as a critique of Berlusconi) niggles away at the ambiguous space between aggrieved resistance and passive inaction * * Guardian * *
In its quiet, brilliant way, this is a novel you will read carefully. It is subtle and powerful; it deserves to be a classic. * * Scotsman * *
A moving intellectual thriller * * London Magazine * *
subtle and powerful; it deserves to be a classic -- William Leith * * The Scotsman * *
gripping * * Baby & Me * *
A masterpiece . . . Romantic, devastating, thrilling and formally inventive -- Mohsin Hamid * * Esquire Magazine * *
At once a thrilling mystery, a literary inquiry, and a meditation on politics and fascism, this novel about an overweight journalist in 1930s Portugal amazed me with its compression and use of the testimonial form. Close to perfection. -- Mohsin Hamid * * The Week * *
ANTONIO TABUCCHI was born in Pisa in 1943. Tabucchi authored twenty critically acclaimed novels and short story collections, nine of which have been translated into English, together with numerous essays and plays. Twice shortlisted for the Man Booker International Prize, he received many prestigious awards, including the Prix Medicis etranger for Indian Nocturne and the Premio Campiello, the Premio Viareggio and the Aristeion Prize for Pereira Maintains. Tabucchi was Emeritus professor at the University of Siena, and also taught at Bard College in New York, the Ecole de Hautes Etudes and the College de France in Paris. He died in 2012.
GOR003466304
9781847679369
1847679366
Pereira Maintains by Antonio Tabucchi
Antonio Tabucchi
Used - Good
Paperback
Canongate Books Ltd
2011-07-21
208
N/A
Book picture is for illustrative purposes only, actual binding, cover or edition may vary.
This is a used book - there is no escaping the fact it has been read by someone else and it will show signs of wear and previous use. Overall we expect it to be in good condition, but if you are not entirely satisfied please get in touch with us
Trustpilot