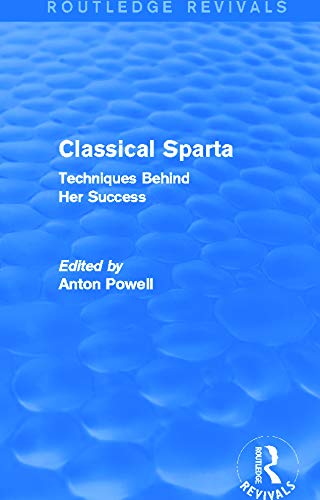 Classical Sparta: Techniques Behind Her Success by Anton Powell

This collection, first published in 1989, investigates aspects of the Spartan polity which have often been overlooked or underestimated. Viewed at least until the Renaissance as the epitome of classical virtues, Sparta has in the last two centuries suffered a rapid decline in reputation among liberal-minded scholars, repelled by many of the repressive measures employed by this remarkably successful city-state, which for centuries dominated mainland Greece.

Recent studies have emphasised permanent problems which beset Sparta: the small size of her citizen body, the tensions between noble Spartiates and commoners, the ambiguous role of women, and, of course, the helots. Classical Sparta: Techniques Behind Her Success seeks to present this intriguing polis by exploring how its perennial difficulties were, for so long, ingeniously overcome. Specifically, the essays in this volume address themselves to broadly ideological issues, demonstrating how skilful propaganda and deception contributed significantly to the longevity of the Spartan state.

NLS9780415743341
9780415743341
0415743346
Classical Sparta: Techniques Behind Her Success by Anton Powell
Anton Powell
New
Paperback
Taylor & Francis Ltd
2015-05-05
196
N/A
Book picture is for illustrative purposes only, actual binding, cover or edition may vary.
This is a new book - be the first to read this copy. With untouched pages and a perfect binding, your brand new copy is ready to be opened for the first time
Trustpilot