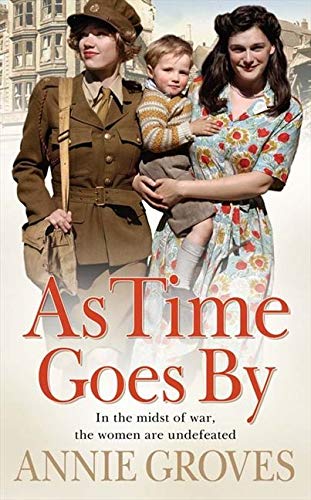 As Time Goes By by Annie Groves

As Time Goes By by Annie Groves

When Sam Grey joins the ATS, and is posted to Liverpool she wants to show that she's as brave as any man, and when she doesn't get the chance her lively nature leads her into confrontation with her authoritarian boss. Sparks also fly when she encounters Johnny, whose heroic work in bomb disposal makes him very attractive to many women - but Sam's determined not to fall for his charm.

Sally wants nothing more than to protect her small children while her husband is a prisoner of war. She works hard doing shifts in a factory and singing at the Grafton ballroom, confessing to no-one the shameful reason why she needs two jobs. But help is at hand, from a most unlikely source.

This stirring tale of women fighting together to do their bit for their country, keep their families together and finding love and fulfilment in the process will delight her fans and win her many more.

`An engrossing story' My Weekly

`A stirring and heartrending family saga...Against a backdrop of change when the suffragette movement was coming to the fore, the choices and dreams of a generation of women combine to create this passionate story' Liverpool Daily Post

`Heartwrenching and uplifting in equal measure - a tragic indictment of what can happen when you swap passion for duty. Roll on the sequel!' Take a Break

`Written from the heart' My Weekly

Annie Groves was born and lived in the north-west of England all of her life. She was the author of the Pride family series, Ellie Pride, Connie's Courage and Hettie of Hope Street, for which she drew upon her own family's history, picked up from listening to her grandmother's stories when she was a child. Her next set of novels was the World War II series Goodnight Sweetheart, Some Sunny Day, The Grafton Girls and As Time Goes By. These were followed by the Campion series, Across the Mersey, Daughters of Liverpool, The Heart of the Family, Where the Heart Is and When the Lights Go on Again, which are also based on recollections from members of her family, who come from the city of Liverpool. My Sweet Valentine follows on from Home for Christmas and London Belles and is the third in this series, which introduces a set of glorious characters living in Article Row in Holborn.
Annie Groves, whose real name was Penny Halsall, also wrote under the name of Penny Jordan and was an international bestselling author of over 170 novels with sales of over 84 million copies.
Sadly, Penny Halsall died in 2011. She left a wonderful legacy of heart-warming novels for many more fans to discover and she will be greatly missed by all who knew her.
The final books in the Article Row series, Only a Mother Knows and A Christmas Promise, will be published posthumously in 2013.

GOR000421830
9780007209699
000720969X
As Time Goes By by Annie Groves
Annie Groves
Used - Very Good
Paperback
HarperCollins Publishers
2008-02-18
512
N/A
Book picture is for illustrative purposes only, actual binding, cover or edition may vary.
This is a used book - there is no escaping the fact it has been read by someone else and it will show signs of wear and previous use. Overall we expect it to be in very good condition, but if you are not entirely satisfied please get in touch with us
Trustpilot