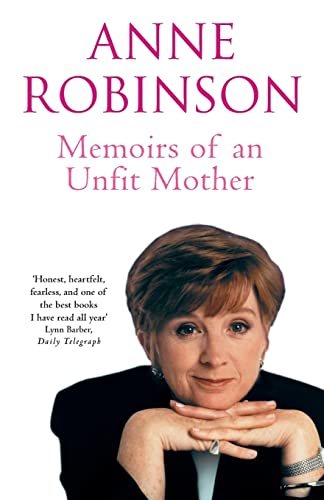 Memoirs of an Unfit Mother by Anne Robinson

* The extraordinary roller-coaster story of Anne Robinson's life from alcoholism and a vicious custody battle for her daughter - which haunts her to this day - to her triumphant fight back.
* A brave and remarkable book by a woman at the height of her career.

Memoirs of an Unfit Mother by Anne Robinson

Anne Robinson's mother was a cross between Robert Maxwell and Mother Teresa. When Anne became a young reporter in Fleet Street, her mother, a wealthy market trader, bought her a mink coat and told her to have a facial once a month.

But Anne Robinson's early success almost ended in her destruction. A doomed marriage was followed by a secret custody battle for her two-year-old daughter, Emma. 'Is it true?' her husband's barrister demanded in court, 'you once said you'd rather cover the Vietnam War than vacuum the sitting room?'

A shocking, funny, poignant and honest account of three generations of women: Anne's formidable mother, Anne and her daughter Emma. Memoirs of an Unfit Mother tells of Anne's downfall, the shame of the years after the custody battle and her subsequent alcoholism. And the triumph of returning to take a second go at life. And making it work.

A cracking, unsentimental good read..love her or loathe her, Robinson has produced a book that revolutionises the celebrity autobiography * THE OBSERVER *
Devastating, original, self-lacerating, glittering with anger and thwarted maternal love...the book, like Robinson herself, is a combustable mixture of ferocity and vulnerability * DAILY TELEGRAPH *
Robinson is no heroine- at least of all in her own eyes...but she is admirable. * THE SPECTATOR *
It's a brilliant read, and a lesson to would-be-showbiz blog writers. * DAILY MAIL *

Famous newspaper columnist. The first woman regularly to edit a national newspaper.
Watchdog more than doubled its audience after Anne Robinson joined it, getting sit-com ratings.
The Weakest Link attracted the largest number of daytime viewers in the history of television.

GOR000377160
9780751536249
0751536245
Memoirs of an Unfit Mother by Anne Robinson
Anne Robinson
Used - Very Good
Paperback
Little, Brown Book Group
2004-09-02
352
N/A
Book picture is for illustrative purposes only, actual binding, cover or edition may vary.
This is a used book - there is no escaping the fact it has been read by someone else and it will show signs of wear and previous use. Overall we expect it to be in very good condition, but if you are not entirely satisfied please get in touch with us
Trustpilot