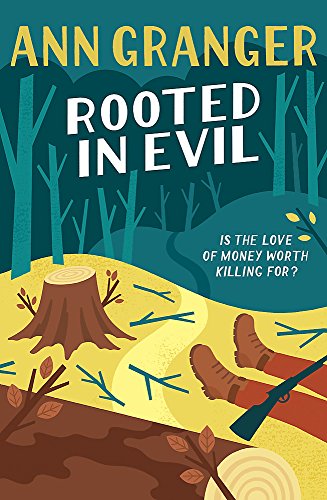 Rooted in Evil is the fifth Cotswold village crime novel featuring Campbell and Carter from Ann Granger. Sure to appeal to fans of Midsomer Murders and M. C. Beaton's Agatha Raisin mysteries.

Rooted in Evil by Ann Granger is set in the Cotswold village of Weston Saint Ambrose and features Inspector Jess Campbell and Superintendent Ian Carter in their fifth murder mystery.

When the body of a man, with his brains blown out, is found in a Cotswold wood it looks like suicide. But looks can be deceptive and it doesn't take long for the police to identify that there's more to the case than meets the eye.

People's stories don't add up and when Superintendent Ian Carter and Inspector Jess Campbell start probing it becomes clear that the dead man had ruffled more than a few feathers in this close-knit community. His stepsister had been bailing him out of his financial troubles - much against her husband's wishes - but, with his money worries still mounting, the victim had become a desperate man...

As Jess and Ian dig deeper and deeper into the case, a cover-up is exposed and bitter resentment rises to the surface to reveal a killer.

Characterisation, as ever with Granger, is sharp and astringent * The Times *
The plot is neat and ingenious, the characters rounded and touchingly credible ... a pleasure to read * Ham and High *
The reader can expect a treat. Lively, different and fun * Yorkshire Post *
She is on to another winner * Birmingham Post *
Ann Granger has lived in cities all over the world, since for many years she worked for the Foreign Office and received postings to British embassies as far apart as Munich and Lusaka. She is now permanently based in Oxfordshire.
GOR008750918
9781472204592
147220459X
Rooted in Evil (Campbell & Carter Mystery 5): A cosy Cotswold whodunit of greed and murder by Ann Granger
Ann Granger
Campbell and Carter
Used - Very Good
Hardback
Headline Publishing Group
2017-06-27
320
N/A
Book picture is for illustrative purposes only, actual binding, cover or edition may vary.
This is a used book - there is no escaping the fact it has been read by someone else and it will show signs of wear and previous use. Overall we expect it to be in very good condition, but if you are not entirely satisfied please get in touch with us
Trustpilot