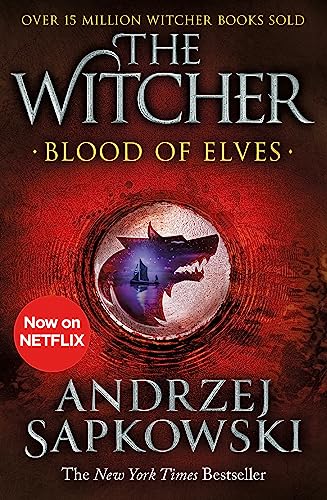 Blood of Elves by Andrzej Sapkowski

The Witcher, Geralt of Rivia, holds the fate of the world in his hands in the New York Times bestselling first novel in the Witcher series that inspired the Netflix show and video games.

For more than a hundred years, humans, dwarves, gnomes and elves lived together in relative peace. But times have changed, the uneasy peace is over and now the races are fighting once again - killing their own kind and each other.

Into this tumultuous time is born a child of prophecy, Ciri, surviving heiress of a bloody revolution, whose strange abilities can change the world - for good, or for evil...

As the threat of war hangs over the land, Geralt the Witcher must protect Ciri from those who are hunting the child for her destructive power.

But this time, Geralt may have met his match.

Like Mieville and Gaiman, Sapkowski takes the old and makes it new - FOUNDATIONAn incredibly nuanced, well-articulated novel, imbued with a self-assured command of description and brimming with Eastern European folklore - Starburst on Time of ContemptDelightfully dry humour, mythology brimming with radical creatures and a group of interesting characters - Fantasy Book ReviewOne of the best and most interesting fantasy series I've ever read - Nerds of a FeatherThere's lots of imagination on show, the writing has a strong voice, and the Witcher is an entertaining character - Mark Lawrence
Andrzej Sapkowski was born in 1948 in Poland. He studied economy and business, but the success of his fantasy cycle about the Witcher Geralt of Rivia turned him into a bestselling writer and he is now one of Poland's most famous and successful authors, selling more in his own country than Stephen King or Michael Crichton.
GOR010534000
9781473231078
1473231078
Blood of Elves: Witcher 1 - Now a major Netflix show by Andrzej Sapkowski
Andrzej Sapkowski
The Witcher
Used - Very Good
Paperback
Orion Publishing Co
2020-02-11
320
N/A
Book picture is for illustrative purposes only, actual binding, cover or edition may vary.
This is a used book - there is no escaping the fact it has been read by someone else and it will show signs of wear and previous use. Overall we expect it to be in very good condition, but if you are not entirely satisfied please get in touch with us
Trustpilot