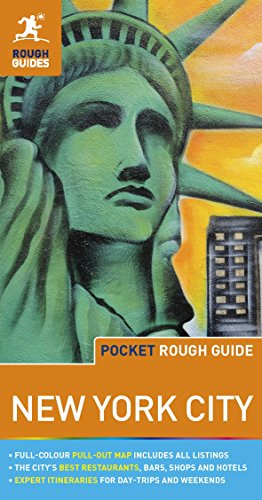 A guide to the cultural capital of the USA, with all the key sights, restaurants, shops and bars presented in an easy-to-use format. It also features a full-colour, pull-out map.

The best New York has to offer - in your pocket. Pocket Rough Guide New York City is your essential guide to the cultural capital of the USA, with all the key sights, restaurants, shops and bars in an easy-to-use format, and a full-colour, pull-out map. Whether you have an afternoon or a few days at your disposal, our itineraries help you plan your trip, and the Best of New York section picks out the highlights you won't want to miss, from MoMA's incredible modern art collection to towering skyscrapers like the Empire State. Divided by area for easy navigation, the Places section is written in Rough Guide's trademark honest and informative style, with listings of the must-see sights and our pick of the places to eat, drink and dance, from the best Jewish delis to the city's most historic jazz clubs. Make the most of your time with The Pocket Rough Guide to New York City.
Reliable, readable Rough Guides * Conde Nast Traveller *
Martin Dunford is cofounder of the Rough Guides and the author of Rough Guide to Rome, Rough Guide to New York, and Rough Guide Directions Rome. Dunford is also coauthor of the Rough Guides to Belgium and Luxembourg, Brussels, the Netherlands, Italy, and Amsterdam.

Stephen Keeling grew up in England and graduated from the University of Oxford in 1992 with a degree in history, then secured a job with The Baltic Observer in Riga, Latvia, as an assistant business editor. In 2007 he wrote the first Rough Guide to Puerto Rico and contributed to Make the Most of Your Time on Earth. Since then, Keeling has updated the Rough Guides to Canada, the Caribbean, Florida, Mexico, New England, New York, Spain, and the United States. He also writes for The Independent, Budget Travel, and other publications.

Andrew Rosenberg is a freelance copy editor and sometimes writer. He lives with his wife, Melanie, his son, Jules, and their cats, Caesar and Louise. He has worked for ESPN the Magazine and was the coauthor of The Rough Guide to New York City. Rosenberg studied English at the University of Virginia.

GOR005765396
9781409360209
1409360202
Pocket Rough Guide New York City by Andrew Rosenberg
Andrew Rosenberg
Pocket Rough Guides
Used - Very Good
Paperback
APA Publications
2013-02-01
208
N/A
Book picture is for illustrative purposes only, actual binding, cover or edition may vary.
This is a used book - there is no escaping the fact it has been read by someone else and it will show signs of wear and previous use. Overall we expect it to be in very good condition, but if you are not entirely satisfied please get in touch with us
Trustpilot