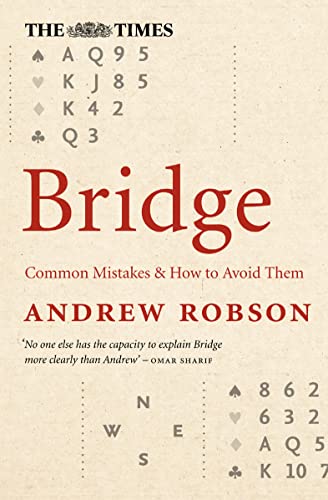 The Times Bridge by Andrew Robson

A large print bridge guide aimed at the less experienced or social player who longs to improve but keeps repeating the same mistakes, often not knowing that they are mistakes.

The Times Bridge: Common mistakes and how to avoid them (The Times Puzzle Books) by Andrew Robson

A large print bridge guide aimed at the less experienced or social player who longs to improve but keeps repeating the same mistakes, often not knowing that they are mistakes.

Andrew Robson, The Times Bridge Correspondent, is both a champion bridge player and an inspired teacher. At his bridge club he teaches and tutors and has acquired great practical knowledge about how people learn to play bridge.
Based on Andrew Robson's Friday column in The Times, common bridge mistakes are presented with an outline of what actually happened and what should have happened. Along with every mistake is a handy tip 'If you remember just one thing..' which has proved very popular with The Times readers.
The first section of the book, 'The Game', is a basic outline providing the key to playing a sensible game of Bridge, subdivided into Bidding, Declarer Play and Defence. Included within this are all the 'If you remember just one thing' tips that also appear in the main body of the book.
The reader can either read 'The Game' first, paying particular attention to the tips, or they can dip in and out of the main body of text, picking a common mistake at random, with the option of cross-referencing to the same tip in 'The Game' section.
Bridge is a growing enthusiasm and is now being played by a much wider age range - it is no longer a game for those who have retired. This is a long-awaited first book aimed at the vast majority of bridge players who would like to avoid falling into the same trap time and time again.

If you want to be better, buy the book
The Spectator

Former World Junior Champion, Andrew has had countless successes world-wide. First British player to win a US Major (in 1998). Best recent performance was winning the Silver Medal in the World Individual Championships in 2004. Started The Andrew Robson Bridge Club in 1995 in Parsons Green, London. Best known for column in The Times. Lives in Putney with wife Lorna and two young daughters Hannah and Mimi.

GOR008226731
9780007235476
000723547X
The Times Bridge: Common mistakes and how to avoid them (The Times Puzzle Books) by Andrew Robson
Andrew Robson
The Times Puzzle Books
Used - Very Good
Paperback
HarperCollins Publishers
20060403
208
N/A
Book picture is for illustrative purposes only, actual binding, cover or edition may vary.
This is a used book - there is no escaping the fact it has been read by someone else and it will show signs of wear and previous use. Overall we expect it to be in very good condition, but if you are not entirely satisfied please get in touch with us
Trustpilot