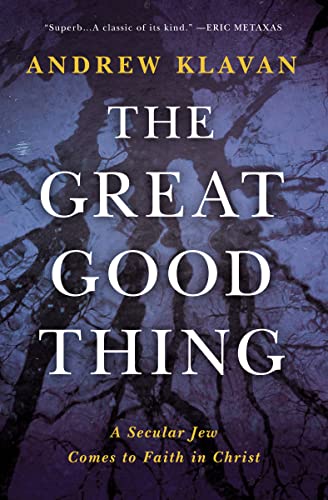 Edgar Award-winner and internationally bestselling novelist tells of his improbable conversion from agnostic Jewish-intellectual to baptized Christian and of the books that led him there.

The Great Good Thing: A Secular Jew Comes to Faith in Christ by Andrew Klavan

No one was more surprised than Andrew Klavan when, at the age of fifty, he found himself about to be baptized. The Great Good Thing tells the soul-searching story of a man born into an age of disbelief who had to abandon everything he thought he knew in order to find his way to the truth.

Best known for his hard-boiled, white-knuckle thrillers and for the movies made from them--among them True Crime and Don't Say a Word--bestselling author and Edgar Award-winner Klavan was born in a suburban Jewish enclave outside New York City.

He left the faith of his childhood behind to live most of his life as an agnostic until he found himself mulling over the hard questions that so many other believers have asked:

In The Great Good Thing, Klavan shares that his troubled childhood caused him to live inside the stories in his head and grow up to become an alienated young writer whose disconnection and rage devolved into depression and suicidal breakdown.

In those years, Klavan fought to ignore the insistent call of God, a call glimpsed in a childhood Christmas at the home of a beloved babysitter, in a transcendent moment at his daughter's birth, and in a snippet of a baseball game broadcast that moved him from the brink of suicide. But more than anything, the call of God existed in stories--the stories Klavan loved to read and the stories he loved to write.

Join Klavan as he discovers the meaning of belief, the importance of asking tough questions, and the power of sharing your story.

Andrew Klavan is an award-winning writer, screenwriter, and media commentator. An internationally bestselling novelist and two-time Edgar Award-winner, Klavan is also a contributing editor to City Journal, the magazine of the Manhattan Institute, and the host of a popular podcast on DailyWire.com, The Andrew Klavan Show. His essays and op-eds on politics, religion, movies, and literature have appeared in the Wall Street Journal, the New York Times, the Washington Post, the LA Times, and elsewhere.
GOR009402660
9780718017347
071801734X
The Great Good Thing: A Secular Jew Comes to Faith in Christ by Andrew Klavan
Andrew Klavan
Used - Very Good
Hardback
Thomas Nelson Publishers
20161020
304
N/A
Book picture is for illustrative purposes only, actual binding, cover or edition may vary.
This is a used book - there is no escaping the fact it has been read by someone else and it will show signs of wear and previous use. Overall we expect it to be in very good condition, but if you are not entirely satisfied please get in touch with us
Trustpilot