The Track of Sand Andrea Camilleri 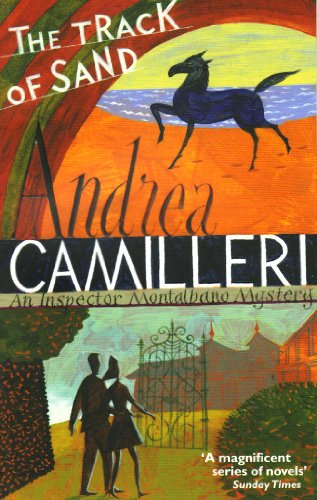 The Track of Sand by Andrea Camilleri

The Track of Sand by Andrea Camilleri

As seen on TV: now a major BBC4 television series.

Inspector Montalbano rises one morning to find the carcass of a horse on the beach in front of his seaside home. But no sooner do his men arrive, than the body has mysteriously vanished, leaving behind only a trail in the sand . . .

Before long Rachele, a beguiling equestrian champion, turns up at police headquarters to report her horse missing. She had been keeping it at the stables of a certain Saverio Lo Duca, one of the richest men in Sicily. Montalbano investigates, and soon things take a more disturbing turn . . . But who has Montalbano upset within this strange, unfamiliar world of horse-racing? And what has the Mafia to do with it all?

Maneuvering his way through the colorful demimonde of eccentric aristocrats and high-rolling bourgeois, Montalbano must decipher the cryptic messages being sent by those spying on him and once again call upon his special blend of intuition, analysis, play-acting and Proustian memory for good food, if he is to uncover this latest mystery . . .

Andrea Camilleri is one of Italy's most famous contemporary writers. His Montalbano series has been adapted for Italian television and translated into nine languages. He lives in Rome.
GOR003251166
9780330532594
0330532596
The Track of Sand by Andrea Camilleri
Andrea Camilleri
Inspector Montalbano mysteries
Used - Very Good
Paperback
Pan Macmillan
20101026
288
N/A
Book picture is for illustrative purposes only, actual binding, cover or edition may vary.
This is a used book - there is no escaping the fact it has been read by someone else and it will show signs of wear and previous use. Overall we expect it to be in very good condition, but if you are not entirely satisfied please get in touch with us
Trustpilot